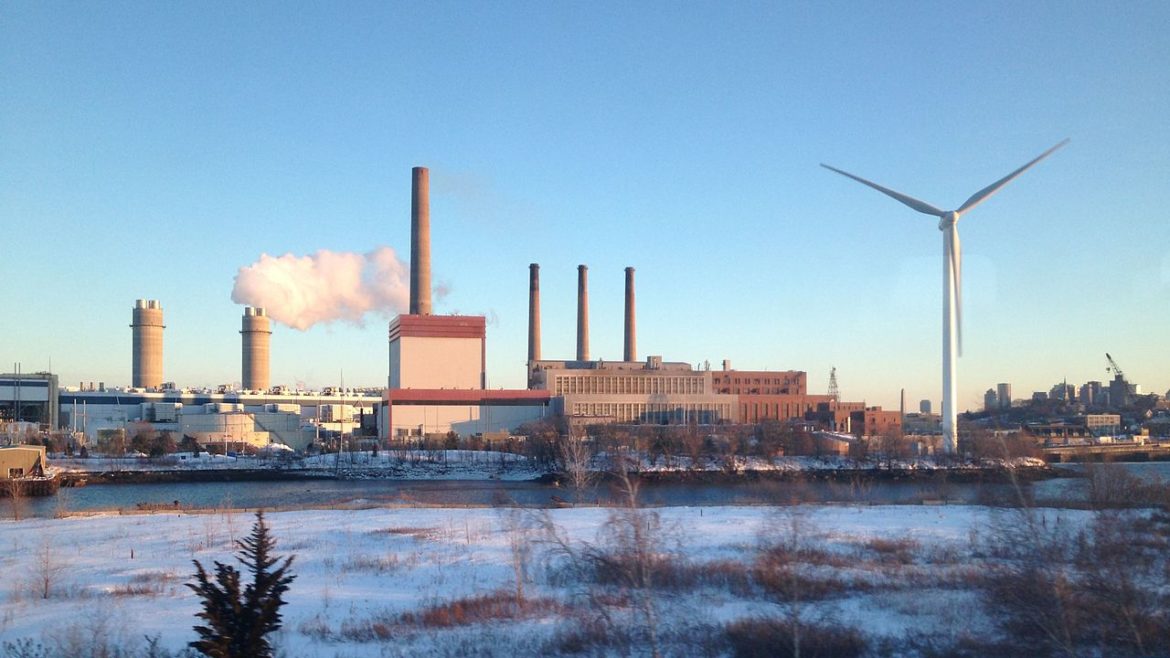 Mystic Generating Station, on the Mystic River in Everett, Massachusetts.

Critics say ISO New England was too quick to dismiss a more expensive plan that would have helped prepare the Boston-area electric grid for future offshore wind.

“ISO New England had an opportunity here to further the potential for offshore wind development with some of the proposals put forward,” said Phelps Turner, a senior attorney with the Conservation Law Foundation. “And they missed that opportunity.”

The Mystic Generating Station, a natural gas-burning facility that is one of the largest plants in New England, is located in Everett, a small city across the Mystic River from Boston. It’s the only power plant in the metro area, which will completely rely on outside sources after Mystic’s scheduled shutdown in 2024.

The question now is how to strengthen transmission so that the system can handle the added electron traffic into the city during times of high demand. ISO New England, the organization that oversees the region’s electric grid, put out a call for proposals to address the problem. The organization received 36 proposals; in the first round of assessment, it eliminated 35 of them from consideration for a range of reasons.

What remained was a plan known as Ready Path put forward by a partnership between the state’s two major utilities, National Grid and Eversource. The project will upgrade equipment at existing substations owned by the utilities, so it is unlikely to be slowed down by permitting issues and should be completed by the time Mystic retires at the end of May 2024. With a price tag of $49 million, it also has the lowest estimated cost of all the proposals.

“It will provide a complete reliability replacement to Mystic,” said Bill Quinlan, Eversource’s president of transmission. “It meets the need, it’s the lowest cost, and they have confidence it will be in place prior to Mystic’s retirement.”

Not everyone, however, is convinced that the utilities’ straightforward, task-focused plan is the best choice for the environment or consumers. Some feel ISO New England should have used the procurement process to explore more ambitious approaches to preparing the grid for the future, particularly when it comes to offshore wind.

Massachusetts has committed to developing at least 1,600 megawatts of offshore wind capacity, with another 1,600 megawatts likely to follow. Pending legislation could boost that number even higher. The grid will need upgrades to move all that power when those projects come online.

With this long-term challenge in mind, transmission development company Anbaric submitted two proposals that aimed to both solve the reliability concerns caused by Mystic’s retirement and create a transmission circuit between Boston and Plymouth, a coastal town in southeastern Massachusetts, near the area offshore wind developments are planned. Anbaric’s plan would also prepare the transmission system to remain reliable upon the retirement of other fossil fuel-burning plants in the area, such as the Canal Generating Plant on Cape Cod, said Theodore Paradise, senior vice president of transmission strategy for Anbaric.

This forward-looking functionality, however, comes with a cost: The price tags on the two proposals were $449 million and $758 million. However, despite these high numbers, these projects would actually save consumers money in the long run, Paradise said. A future project to transmit offshore wind power to Boston would likely cost at least $650 million, he said.

“We were eliminating having to spend that money altogether,” he said. “Doesn’t it make sense to do something that solves for some of these other issues too and, in doing so, is actually cheaper for consumers?”

The ISO report on its selection process indicates that Anbaric’s proposals were rejected for a variety of reasons beyond the cost, including failure to prove it had access to the land or facilities required to execute its plan by the deadline. The assessment process, said ISO New England spokesperson Matt Kakley, did exactly what it was intended to do.

“It’s the ISO’s responsibility to solve transmission issues in the most timely and cost-effective way,” he said. “That’s ultimately what the review process bore out.”

But that very process, with its focus on narrowly defined goals and low cost, is itself a problem, said Deborah Donovan, Massachusetts director of the Acadia Center, a nonprofit focused on energy and climate change. A better approach would consider long-term costs, carbon emissions, and environmental justice, she said. As it stands, there are no clear answers about what impact the current plan will have on carbon emissions, she noted.

In June, Massachusetts’ senators Edward Markey and Elizabeth Warren sent a letter to ISO New England asking the organization to consider the environmental and public health impacts of the proposed solutions in its evaluations. The request for proposals, the letter noted, listed environmental impact as the lowest priority factor in evaluating proposals and didn’t consider public health implications at all.

Anbaric submitted a lengthy report to ISO New England detailing the factual, technical, and legal errors it feels the organization made in the evaluation process. However, any attempt to appeal ISO New England’s decision would “not be fruitful,” Paradise said.

“They really missed this great opportunity to say, ‘We’re going to fix your liability, avoid transmission upgrade costs, and really start to change the grid,’” Paradise said. “I’d say the can was vigorously kicked down the road on that.”