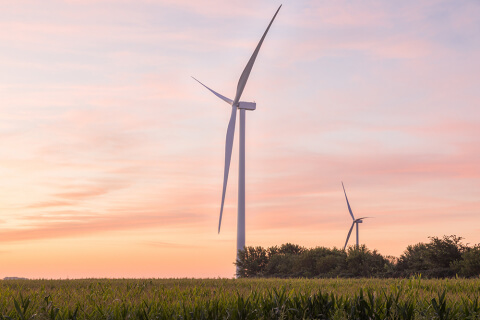 Located in Winnebago and Kossuth counties in north-central Iowa, the Golden Plains Wind Farm was developed and constructed by EDF Renewables. The farm utilizes 82 GE wind turbines to generate electricity. With Golden Plains, EDF Renewables has developed or placed in service 1.4 GW of wind energy capacity in the state.

“This project benefits customers and the environment through reductions in emissions and fuel costs. It also gives landowners lease payments, and it helps communities through increased local tax revenue for schools and community services,” adds Kouba.

The project injected millions of dollars into the local economy and employed hundreds of workers at the peak of construction.

By the end of 2020, Alliant Energy’s Iowa energy company expects to own and operate 1,299 MW of wind generation in Iowa. This expansion plans to provide enough renewable energy to create hundreds of jobs during construction, generate hundreds of millions in local property taxes throughout the life of the wind farms and pay hundreds of millions of dollars in lease payments to landowners.

Alliant Energy’s target is to reduce carbon dioxide emissions by 40% by the year 2030 across their entire service area in Iowa and Wisconsin.

“We are pleased to partner with Alliant Energy to deliver competitively-priced, clean energy to its customers through the Golden Plains Wind Project,” says Kate O’Hair, vice president of development of the North Region at EDF Renewables.

“The project provides an economic boost to the Iowa economy, through new construction and operations jobs, expanded tax base and recurring, long-term income for participating landowners,” adds O’Hair.