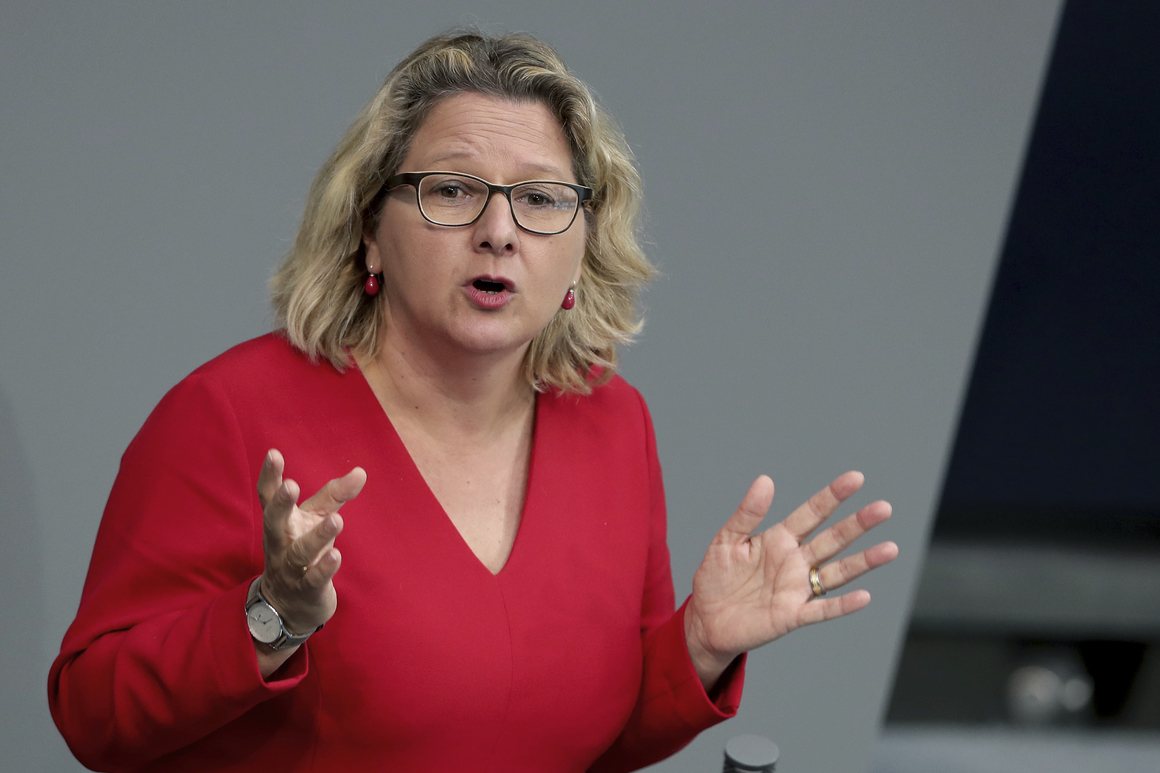 BERLIN — EU leaders last week agreed to increase the bloc’s 2030 climate target by the end of the year. Now it’s up to German Environment Minister Svenja Schulze to make it happen.

That’s a big change for Berlin, which has traditionally been wary of higher EU climate targets.

Germany holds the rotating presidency of the Council of the EU, which means Schulze chairs meetings of environment ministers until the end of December. She’ll have to oversee tricky negotiations on raising the bloc’s 2030 emissions reduction goal from 40 percent to as high as 55 percent — something that pits rich countries against poor and East against West.

“We have to deliver an updated [EU climate commitment] in 2020. It’s only six months [but] we have to deliver,” Schulze told POLITICO from her Berlin office after hosting a first informal meeting with her peers in mid-July. “The pressure is huge … We need very, very tough negotiations. There are no summer holidays for anyone.”

The issue will heat up in late September when the European Commission is due to come out with a plan for reaching the 2030 target, and map implications for the energy sector. The 2030 goal is also part of the bloc’s commitment under the Paris Agreement, and there’s pressure for countries to submit updated and ideally higher emissions reduction objectives by the end of the year.

“Not to fulfill the Paris Agreement, not delivering, that’s a global signal the EU shouldn’t give … It’s not an option,” Schulze said. “The Paris Agreement is clear, we need to deliver in 2020 … that’s the challenge for the German presidency.”

Under a best-case scenario, Schulze wants ministers to agree a position at the formal Environment Council in late October. The European Parliament is due to agree its position on a 2030 target by then; the legislature faces its own fight, with some green-minded MEPs pushing for a goal as high as 65 percent.

But it’s far from certain that Schulze will rally EU countries that quickly.

There’s also a big question over whether member countries will be content to have ministers agree on a politically fraught new emissions reduction target — which would only require qualified majority support — or insist on having a unanimous sign-off by national leaders. That could push any deal to the end of the year.

“That’s not yet decided,” Schulze said.

She’ll also need to figure out whether she can muscle an agreement for the 2030 target via negotiations on the Climate Law, meant to make the Green Deal goal of climate-neutrality by 2050 legally binding.

“I think it’s going to be very difficult to bring it all together,” she said.

Environment ministers from the Visegrad 4 countries — the Czech Republic, Poland, Hungary and Slovakia — as well as Romania and Bulgaria made clear they first want to see the Commission’s impact assessment before proceeding with talks. In a letter to EU Green Deal chief Frans Timmermans this month, seen by POLITICO, they say any change has to go through EU leaders.

“We would like to avoid a situation where we are left wondering what are the real social, environmental and economic costs for us all,” the ministers said, calling for credible emission forecasts for 2030.

Although a sizeable alliance, largely made up of Northern and Western EU countries, backs increasing the goal to 55 percent, there’s still not enough support to overcome opposition from coal-reliant and poorer nations such as Bulgaria and Poland.

“I see chances that we can come together, especially with the Just Transition Mechanism, which can help those who are more critical. It can work out but it’s going to be a lot of work,” Schulze said.

But last week’s budget compromise makes Schulze’s job even tougher. The Just Transition Fund was whittled down from €40 billion to €17.5 billion, which may not be generous enough to get Warsaw and others to back a 2030 compromise.

That cut came thanks to frugal countries like Denmark, the Netherlands, Austria and Sweden. All of them are also pushing for higher 2030 targets, but that’s balanced against a desire to keep spending in check.

The signal is “climate policy is not that important, what is more important is spending less,” one Central European government official said. “In view of that hierarchy of priorities, you can accept the discussion of the [climate] target to unfold in a similar way: rather than spending more, let’s spend less, lower targets.”

Complicating Schulze’s task, even Germany lacks clarity on 2030. Schulze has come out in favor of a 55 percent goal. German Chancellor Angela Merkel has backed efforts to raise the target, but so far hasn’t committed to a number.

That means the German minister faces a massively complex political puzzle in the next months.

“Yes, there are some states who worry how they’re supposed to manage it all. They have corona, are dealing with its impacts, they have to revive the economy … and have to do more about climate protection. To bring it all together isn’t easy,” Schulze said.