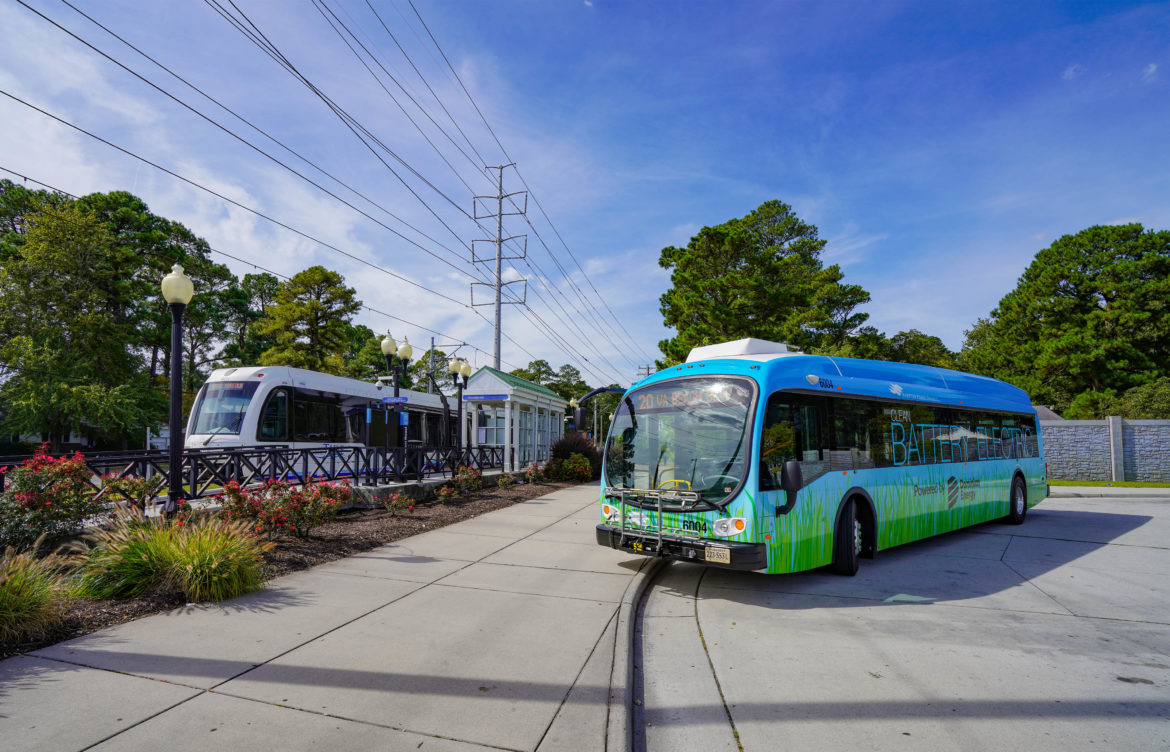 Hampton Roads Transit’s six electric buses will be deployed on the state’s busiest transit route, between Norfolk and Virginia Beach.

Hampton Roads Transit’s initiative to ease six new electric buses into its majority-diesel fleet of 278 at mid-month is not only a boon for burdened lungs.

It’s also a rubber-meets-the road sample, albeit tiny, of Gov. Ralph Northam’s intent to start greening Virginia’s transportation sector as he has the electric grid.

“I’m excited,” the agency’s chief transit operations officer, Jim Price, said about the debut of the state’s first zero-emission e-buses. “We feel strongly that this is in our wheelhouse so we’re not intimidated.”

Drivers and mechanics in Hampton Roads have undergone rigorous training since the sleek e-buses arrived in September from the Proterra manufacturing plant in Greenville, South Carolina. All of them will run exclusively on the 24-mile route, the state’s busiest, between the transit center in Norfolk and Virginia Beach Oceanfront.

Price is aiming for a Nov. 15 rollout. In the meantime, each e-bus is in the midst of a 500-mile test without riders, what’s known as a “burn-in” phase in transit talk.

“It’s a workhouse route,” he said about Route 20 along Virginia Beach Boulevard. “If we run into any problems, we want that to happen when we’re not carrying passengers.”

“The range of an electric bus is affected by how it is operated,” he said about maximizing the performance of its 440 kilowatt hour lithium ion battery via a light touch on the accelerator and brakes. “We’re training drivers to be gentle.”

While the technology wasn’t daunting, the price tag was. Each fully equipped 40-foot e-bus rings in at $974,606, roughly double the cost of a diesel model.

“That was the big disadvantage,” Price said. “It just didn’t look like we would find the money to do this.”

Enter Northam and a General Assembly just as eager to streamline the transportation sector, which accounts for 45% of the state’s heat-trapping gases.

Funding for the new e-buses came from the Volkswagen Environmental Mitigation Trust, the state Department of Environmental Quality’s Clean Transportation Voucher Program and the Federal Transit Administration’s low or no-emission program. Two years ago, Northam vowed to allocate 15% — some $14 million — of the Volkswagen money to electric transit buses.

In tandem with the e-buses, Hampton Roads Transit benefits from legislation providing the agency with its first dedicated funding. The new law means the area’s six cities will continue to fund public transit, but additional state funding will allow the agency to improve and expand regional routes.

“All of our financial concerns were addressed,” Price said, adding that the funding allows the transit agency “to be good stewards for the community. We’re always looking for ways to reduce emissions.”

Virginia’s investment in the Hampton Roads e-buses is linked to the state’s decision to join a regional Transportation and Climate Initiative.

In September 2018, Virginia became the first state in the South to join an ambitious endeavor started by the District of Columbia and 11 New England and Mid-Atlantic states to reduce the transportation sector’s carbon emissions, while developing a clean economy. It is directed by state and district agencies within its 13 jurisdictions.

By the end of 2019, members had released a draft plan that included several scenarios to cap carbon emissions from cars, trucks and other vehicles. Its goal was to curb regional transportation emissions, about 40% of total greenhouse gas emissions, by up to 25% by 2032.

Briefly, it requires transportation fuel suppliers to buy allowances at auction for each ton of carbon dioxide produced beyond that ceiling. The initiative’s math revealed the auction fees would generate between $5 billion and $7 billion annually for states to invest in public transit, e-buses, charging stations and other clean energy options.

Prior to the COVID 19 pandemic, organizers hoped to release a final memorandum detailing the program’s design by spring. Now, they say it will happen by the end of the year. The original timeline called for the program to launch in January 2022.

States have committed to advancing equity as part of that final program design. For instance, a plan to invest at least 35% of the proceeds to underserved and overburdened communities was announced during a webinar in late September.

A new study released in early October stated that the initiative’s cap-and-invest policy to modernize transportation will provide up to $11.1 billion in health benefits annually in the region by 2032.

Our Transportation Future circulated the study to boost the initiative’s equity vows. It’s a coalition of 75 national, regional and local organizations in the Northeast corridor focused on fixing the way the region moves people and goods by reducing congestion and pollution.

“For far too long, the costs of harmful air pollution from fossil fuel-powered cars, trucks and buses has been disproportionately shouldered by the most vulnerable communities,” coalition leaders wrote in a statement. “In addition to moving forward with a cap-and-invest policy, the states involved in TCI must move immediately and in parallel to enact complementary policies to address any additional pollution burdens.”

The coalition cited findings from a Union of Concerned Scientists 2019 study stating that on average, communities of color from in the Northeast and Mid-Atlantic breathe 66% more air pollution than white residents.

Diesel exhaust from transit buses and other sources is a major factor in urban air pollution that disproportionately affects low-income and disadvantaged communities, according to the U.S. Environmental Protection Agency.

While the upfront cost of an e-bus is steep, they are also cheaper to fuel and maintain. Price’s agency opted to buy the new buses and lease the batteries, anticipating that technology on the latter would change significantly in rapid fashion.

E-buses just one step to a greener Hampton Roads

Price, an employee since 2008, has watched similar agencies evolve environmentally during a 30-year career with stops in Baltimore, Salt Lake City and Seattle.

A provision of the grant requires Price and his colleagues to demonstrate to the federal government that they have destroyed a half dozen old diesel buses.

“We have to cut the engine block and the frame to guarantee they’ll never be used again anywhere in the world,” he said. “It shows we’re making a commitment to reduce carbon emissions.”

While the coronavirus pandemic forced the transit agency to reduce hours, stop charging fares and switch to back-door boarding through June, it reverted to normal service in early July. Bus ridership, which averaged close to 36,000 daily passengers on weekdays in 2019, is recovering incrementally.

He’s eager to hear how customers respond to a cleaner and greener trip.

“We’re going to learn what we can from this technology,” Price  said. “Assuming all these electric buses are going to be a success, we have pretty good ideas on where we can expand and get the best bang for our buck.”

Bob Crum knows six e-buses are just a drop in the climate change bucket, but he views it as one of many climate-related moves coastal Virginia is making to address the formidable reality of regular flooding and land loss due to rising sea levels.

Crum, who has 35 years in public planning, now serves in dual roles as executive director of the Hampton Roads Planning District Commission and the Hampton Roads Transportation Planning Organization. The first is steered by the area’s 17 local governments and the second is a federally designated entity.

“It seems like a small step, but it can grow over time and be part of a broader approach with buses,” he said. “All of it is critically important as we prepare our region for the future.”

The bigger picture comes into view, he said, when piggybacking e-buses with renewable energy and the area’s potential as an offshore wind supply chain hub.

“It’s a great opportunity for us to step forward as leaders in this space,” Crum said. “We have some of the smartest people working on solutions to address these challenges. What if we can become a model for how a metropolitan region can live with this?”