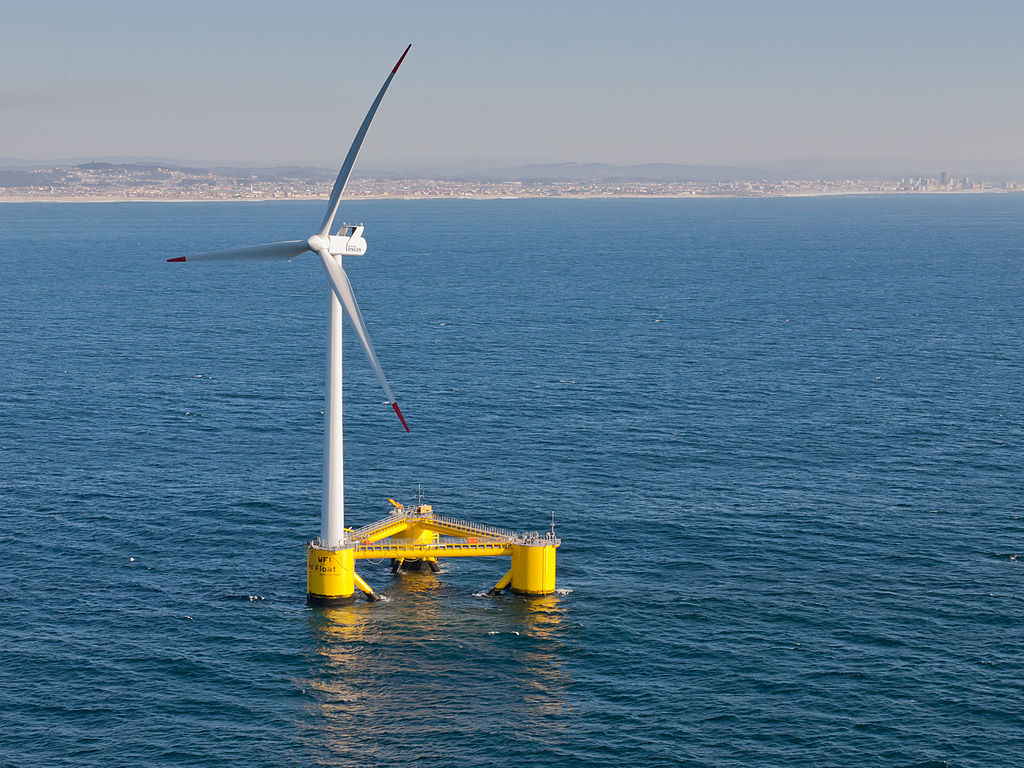 Maine is seeking to choose a site for a test cluster of floating wind turbines, such as this one, located off the shore of Portugal.

People who make a living catching fish and lobster off the state’s coast questioned state officials’ commitment to working with the industry on offshore wind.

Online stakeholder meetings last month revealed the depth of skepticism Maine officials face from the fishing and lobster industries over a proposal for a small test cluster of floating wind turbines off the state’s southern coast.

The series of four webinars, most of which were focused on the fishing industry, were intended to gather input on where to build the project. They were the first of several stakeholder engagement efforts that will continue early this year.

Originally announced in late November, the wind farm, which the state calls a “research array,” would be located 20 to 40 miles offshore in the Gulf of Maine and take up about 16 square miles of ocean, with a maximum of 12 turbines. This is about a tenth of the size of commercial wind lease areas along the East Coast, according to the state. The project would initially have a 20-year lease in the federal waters.

The state is looking to choose a site from an area (outlined in red on this map) in the Gulf of Maine toward the southern end of the state, roughly east of Portland.

While it’s not guaranteed the research array would be in the water before any commercial farms, the state hopes at least some findings from this project will help inform commercial developers. What those findings entail has yet to be determined and will also depend on stakeholder input.

The state plans to apply with the federal Bureau of Ocean Land Management to secure a site in late winter or early spring — a timeline fishing groups called too aggressive. Construction could begin within five years, but that depends on how the permitting goes. This process is happening parallel to an interstate planning process led by the Bureau of Ocean Land Management to gather input for permitting commercial arrays. That process, which Maine is a part of along with New Hampshire and Massachusetts, has been stalled for the past year mostly because of the pandemic.

“The decision to prioritize the research array, I think, is an indication of the desire to collect more research, have more dialogue about where this could be sited, but also what the potential impacts and opportunities” are, said Dan Burgess, director of the Governor’s Energy Office. This is “a sign of our intent to do this in the most collaborative way possible,” he said.

Unlike traditional offshore turbines that sit on towers driven into the seabed, floating turbines are anchored to the seabed with cables. Aside from a single-turbine project currently being led by the University of Maine, whose technology will likely be used in the new array, the United States has no other planned floating turbines, which will be necessary in the deep waters of the Gulf of Maine. There are few floating arrays around the world, according to a 2020 report from Carbon Trust.

Still, even the relatively small area that Maine’s project will consume could be a significant loss for the fishing industry, said Ben Martens, executive director of the Maine Coast Fishermen’s Association.

“That could be one individual’s fishing grounds,” or even an entire community’s, Martens said. “So we are early in the process of trying to understand what the state’s goals are” and how this project will compare to others of different sizes and purposes.

“We’re really hopeful that the project isn’t fast-tracked and that we take the time to have meaningful engagement with the fishing industry in a way that’s respectful and understanding,” Martens said. But already he and others say the timeline feels rushed.

Gathering meaningful input and data from the industry to decide on the most appropriate site for the project would take at least two years, said Annie Hawkins, executive director of the Responsible Offshore Development Alliance. This sentiment was echoed by many webinar attendees.

Applying to the Bureau of Ocean Land Management in the spring is “not even close,” Hawkins said. “The timeline is way off.” Adding the pandemic on top of that, which makes in-person meetings nearly impossible, further complicates the process, she said.

From state officials’ perspective, this is the most time-effective way to stay ahead of commercial development. But Hawkins said the state has leverage on commercial projects: Officials could refuse power purchase agreements with developers, or they could oppose federal projects that interfere with Maine’s fisheries, serving as a sort of veto.

These aren’t guaranteed solutions — the Bureau of Ocean Land Management has the final say on whether a project can go forward in federal waters — but if the state were truly committed to using this research to inform other projects, she said, this would be a potential avenue.

“We’re not in a position yet to say what we would or wouldn’t do, but we will strongly advocate for the interests of Maine and the research array during future processes,” Celina Cunningham, deputy director of the Governor’s Energy Office, wrote in an email.

Fishing industry members are also curious about what the research will entail. The current constraints — not just location and interconnection, but the need also to site the project on an area of seabed that’s gravel or mud — could further limit the research opportunities. Plus, with a 20-year lease, it would be difficult to stop the project if it’s shown to be disruptive to the environment.

“At what point is this really research and what point are you just building wind projects?” Hawkins questioned.

The individual concerns are part of a larger one: The fishing industry isn’t convinced the state is being transparent. Members say they’re ready to work with the state, but they don’t think they’re getting all the information.

State officials have been adamant that they do not have a site chosen and that they want to work with the fishing industry to ensure the site for this project is chosen carefully and collaboratively. But industry members in interviews and at the webinars said there are still too many questions they feel state officials already know the answers to.

“It just feels like we’re really being forced into a decision that we’re not prepared to make,” said Patrice McCarron, executive director of the Maine Lobstermen’s Association. Only 10% of Maine’s lobster license holders are currently required to report precise estimates of their catch, but with new federal funds, the state is about to begin moving toward 100%. (This is part of a federal requirement to help protect the endangered right whale.) Without that data, the siting question can’t be answered, she said.

“Once BOEM issues that lease, that’s your footprint,” she said. So even if data begins to come in once the spot is chosen indicating it’s not a good choice, the array would still have to go there to comply with the lease.

“It’s very unnerving,” McCarron said. “It’s causing a lot of anxiety for people because we’re not sure — how can the fishing industry collaborate or work with the government to make the best decision when we just fundamentally disagree?”

“The way that this has been rolled out, I just don’t feel a sense of trust,” she said. “I don’t feel that information and facts and science are being used rationally. In fact, there aren’t any.”

Officials continue to emphasize that a site has not been chosen, and they’re asking for survey input from members of the public, including the fishing industry.

Going forward, the state will hold “scoping meetings” in January, and Cunningham and others plan to hold small group and one-on-one discussions before the application is submitted to the Bureau of Ocean Land Management.

McCarron said she and other industry members will see what the coming weeks bring, while continuing to remind the public of the value of the lobster industry, which in Maine was worth $485 million in 2019.

“We worry that when you’re on the outside looking in on us, the ocean looks huge,” she said. “It looks like 16 miles, who cares, big deal.” But the industry already has to navigate shipping lanes and fishing use specifications. “There’s definitely a worry that people won’t understand why we’re concerned.”

“It’s just basic survival for these guys,” she said. Maine’s lobster industry is “solid,” she said, “and it’s important that we don’t get lost as all these shiny new things come in.”