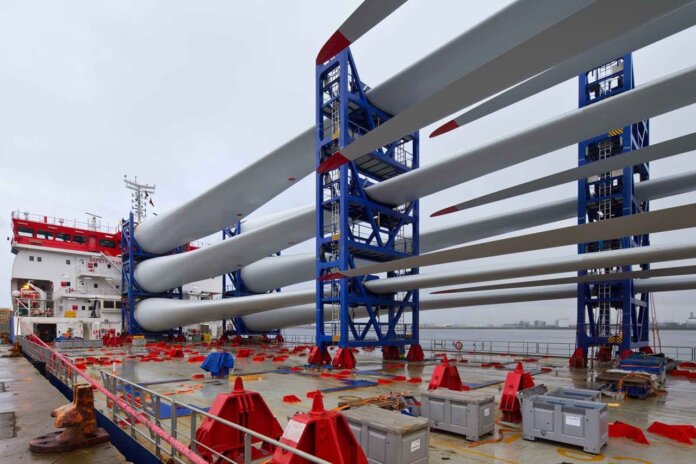 Able Seaton Port (ASP), near Hartlepool in the U.K., has received its first shipment of offshore wind turbine components for the Triton Knoll offshore wind farm after a combined multi-million-pound investment from MHI Vestas Offshore Wind helped transform the port into a specialized assembly and construction facility for use on the Triton Knoll project.

Triton Knoll, which is being constructed by RWE, will install and operate 90 MHI Vestas V164-9.5 MW turbines, each stretching 164 meters tip to tip. The first 15 turbine blades to arrive at the port were manufactured by MHI Vestas at its Isle of Wight facility and finished at its Fawley plant across the Solent.

“Triton Knoll has made a significant investment into ASP to establish wind turbine handling facilities there for the first time,” says Julian Garnsey, project director for Triton Knoll and RWE Renewables. “It’s an investment that secures the northeast of England at the very heart of the delivery of Triton Knoll, and which leaves a lasting legacy for future offshore wind farm projects to be constructed from the region.”

MHI Vestas recently moved onto the 140,000 sq. meter ASP where it is establishing a full turbine logistics and pre-assembly hub for the RWE-managed joint venture project.

During its site preparations, MHI Vestas prioritized U.K. companies in the delivery of the project. ASP now hosts technicians on-site from local suppliers, including Global Wind Service (GWS), Dawson and Boston Energy, and MHI Vestas employees. The main crane and self-propelled modular transporter (SPMT) to be used at ASP for moving turbine components will be supplied by Weldex. The site stevedoring services are supplied by Able.

Able’s transformation of the site is a clear sign of its intent for the future as the facility, renowned for end-of-life handling of oil and gas platforms, is gearing up for a future supporting the renewable energy industry. It began the transformation of ASP ready for Triton Knoll in November 2019, and has established a 140,000 sq meter handling facility with specialist quayside, complete with roads and utility infrastructure, accommodation and office units for those working onsite.

The project is located over 32 kilometers off the Lincolnshire coast, with a turbine array that covers an area of 145 square kilometers. It is jointly owned by RWE, J-Power and Kansai Electric Power, with RWE managing the wind farm’s construction and long-term operation and maintenance work on behalf of its project partners.