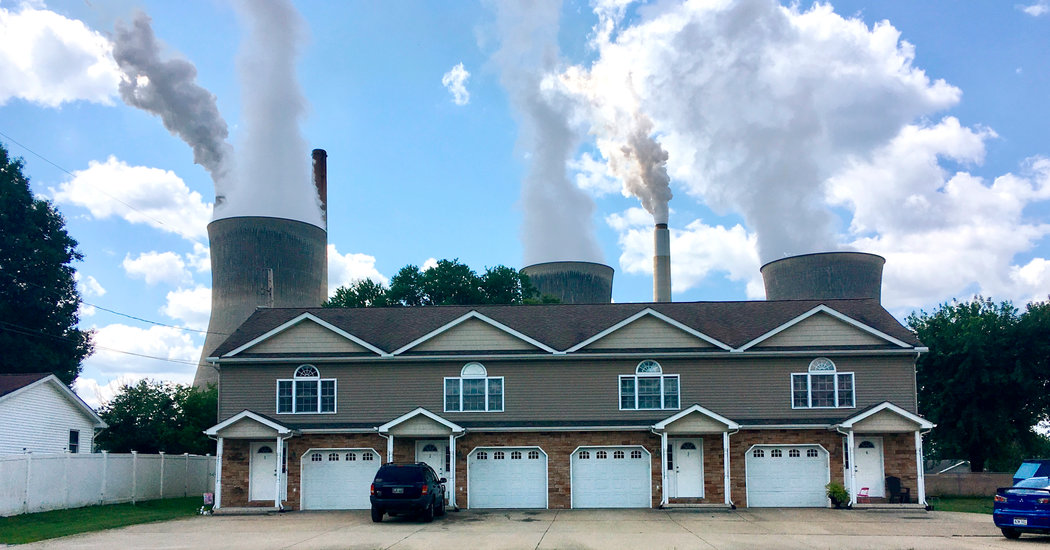 WASHINGTON — The Trump administration is expected on Thursday to weaken regulations on the release of mercury and other toxic metals from oil and coal-fired power plants, another step toward rolling back health protections in the middle of a pandemic.

The final Environmental Protection Agency rule does not eliminate restrictions on the release of mercury, a heavy metal linked to brain damage. Environmental lawyers said the new method of calculating the costs and benefits of curbing mercury pollution would most likely destroy the legal underpinnings of controls on mercury and many other pollutants.

By reducing the health benefit of regulations on paper, while raising their economic costs, the new method could be used to justify loosening restrictions on any pollutant that the fossil fuel industry has deemed too costly to control.

“That is the big unstated goal,” said David Konisky, a professor of public and environmental affairs at Indiana University. “This is less about mercury than about potentially constraining or handcuffing future efforts by the E.P.A. to regulate air pollution.”

The Trump administration’s long-running effort to reduce regulatory burdens on industry has ramped up in recent weeks despite emerging scientific links between dirty air and Covid-19 death rates. While the nation struggles with the coronavirus, the administration has loosened curbs on automobile tailpipe emissions and opted not to strengthen a regulation on industrial soot emissions.

The deregulatory rush appears designed to secure less restrictive rules quickly, in case Republicans lose control of Congress and the White House in November. A new government could move quickly under the Congressional Review Act to overturn any regulation or federal rule within 60 days of it being finalized — making any rule completed after late May or early June vulnerable.

Mandy Gunasekara, a Republican strategist, testified in February to a House committee that the changes to the mercury rule, then in the planning stages, would “fix a dishonest accounting mechanism that the last administration used to justify any regulatory action regardless of costs.” Ms. Gunasekara has since become chief of staff to Andrew R. Wheeler, the E.P.A. administrator.

Environmental lawyers and public health leaders called the timing of the final mercury rule as well as its substance an attack on air quality.

“What is most disconcerting to me is this administration’s lack of interest in science and, frankly, their lack of concern for our nation’s children,” said Aaron Bernstein, interim director of the Center for Climate, Health and the Global Environment at the Harvard T.H. Chan School of Public Health. “Mercury pollution in the United States damages our children’s brains before they even come into the world, and estimates are that that cost is in the billions of dollars.”

Patrick Parenteau, a professor at the Vermont Law School, noted that in virtually every environmental rollback, President Trump’s E.P.A. has acknowledged in the fine print that enormous increases in health problems and deaths will occur because of increased pollution.

A plan to weaken carbon dioxide emissions at power plants, for example, predicted as many as 1,400 additional premature deaths a year. A draft analysis of the soot policy put forward this week showed that tightening the existing standard by 25 percent could save as many as 12,150 lives a year.

Two people close to the administration said the White House was concerned enough about the public perception of loosening environmental rules during the outbreak that it held the mercury plan for several weeks after it passed a review from the White House Office of Information and Regulatory Affairs. E.P.A. officials assured the White House that the agency was merely responding as required to a 2015 Supreme Court ruling that found it must justify the economic impact of the mercury standards.

The weakening of the mercury rule would be one of the most significant regulatory rollbacks engineered by the Trump administration. The existing federal regulation on mercury pollution, completed in 2012, is the most expensive clean air regulation ever written by the E.P.A.

When it published its draft cost-benefit changes last year, the E.P.A. said the cost of cutting mercury from power plant emissions “dwarfs” the economic benefits and argued that the Obama rule could not be justified as “appropriate and necessary.”

The E.P.A.’s 2012 regulation was the first federal standard to require power plants to install pricey pollution controls to limit mercury emissions — at a cost to industry of $9.6 billion a year. The Obama administration justified that cost by tallying the benefits not just of reducing mercury but also “co-benefits” like reducing sulfur dioxide, fine particulate matter and other pollutants that were also curbed by the equipment.

Driving down mercury emissions alone, the studies at the time found, would yield a $6 million annual benefit, a fraction of the cost of controls. But with the rest of the co-benefits and the projected gains in avoided heart disease, asthma attacks and other health problems, the benefits reached $80 billion over five years. Overall, the Obama administration estimated that the rule would prevent 4,700 heart attacks, 130,000 asthma attacks and 11,000 premature deaths each year.

Under the Trump administration’s new rule, such co-benefits will no longer be calculated with cost, only direct benefits.

While coal producers urged Mr. Trump to roll back the rule, the vast majority of electric utility companies have agreed the cost-benefit changes may be of little help to them, because they have already spent the billions of dollars needed to come into compliance. Many of those companies urged the Trump administration to leave the mercury measure in place.

Coal plants subject to the rule “have already spent millions of dollars to install mercury equipment to reduce mercury emissions,” wrote Scott A. Weaver, the director of air quality services for American Electric Power, an Ohio-based electric utility company that operates power plants in 11 states, in a public comment on a draft of the rule.

“Rescinding the standards at this point will create new problems” Mr. Weaver wrote, noting that companies that have sought to recoup the cost of installing mercury control equipment through bills to customers may no longer legally be able to do so. That means the new rule could actually cost companies more money.

Despite such assurances, Matthew Davis, a former E.P.A. scientist who worked with the agency’s office of children’s health protection to develop the original rule, said weakening the rule still represented a threat to children’s health.

“The reason we did this rule is because children and developing fetuses are harmed by mercury,” said Mr. Davis, who now works at the League of Conservation Voters.

The new rule is a victory for one of Mr. Wheeler’s former lobbying clients, Murray Energy Corporation, one of the nation’s largest coal companies, which declared bankruptcy last year and is undergoing a reorganization. The company’s former chief executive, Bob Murray, a major donor to Mr. Trump’s inauguration fund, personally requested the rollback of the mercury rule soon after Mr. Trump took office, in a written “wish list” that he handed to Rick Perry, who was energy secretary at the time.

Jeffrey R. Holmstead, an attorney for the electric utility industry who served in the E.P.A. under the second President George Bush, rejected the idea that the decision was a cynical calculation to set the stage for other regulatory rollbacks.

“It’s not as if the administration has been shy about rolling back other things,” Mr. Holmstead said, dismissing environmental concerns. “I don’t think there’s any impact whatsoever from this,” he said.

In Congress, the Obama-era mercury rule has bipartisan support. Senator Thomas R. Carper of Delaware, the top Democrat on the Environment and Public Works committee, and Senator Lamar Alexander of Tennessee, the chairman of an energy and water appropriations subcommittee, wrote an opinion piece in USA Today in November urging the Trump administration to leave the regulation unchanged.

“Changing the rule after billions of dollars have already been spent means that utilities will have less certainty about federal regulations,” they wrote. “The gains we have made over the past decade to protect children and families from dangerous mercury pollution should not be lost.”