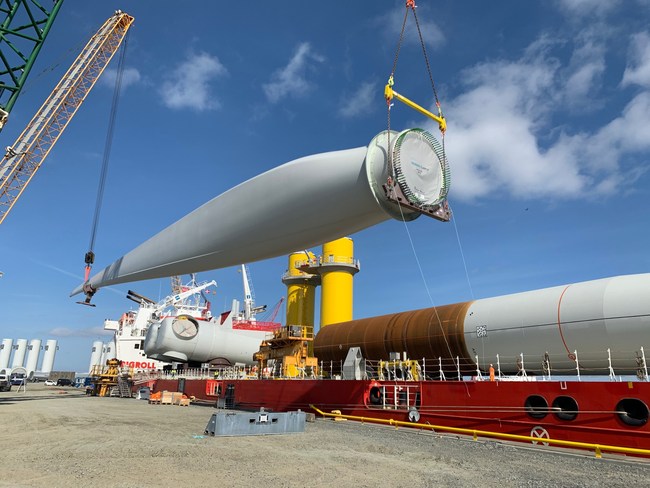 The project team and vessel crews have been successful in navigating the impact of the worldwide coronavirus pandemic to keep the team safe and the project on schedule.

The foundations, consisting of the turbines’ monopiles, transition pieces and anode cages fabricated by EEW SPC, have been loaded onto the Bigroll Beaufort cargo ship in Rostock, Germany. The components for the two, 6 MW Siemens Gamesa turbines were loaded in Esbjerg, Denmark, before the vessel embarked in mid-April on the approximately two-week transatlantic journey to Halifax, Nova Scotia, Canada.

“This is a big step toward the installation of the first offshore wind turbines in federal waters, which will deliver clean, renewable energy to our customers,” says Mark D. Mitchell, vice president of generation construction at Dominion Energy.

“The construction of these two turbines will help us reach our goal for net zero emissions and position Virginia as a leader in offshore wind,” he adds.

Installation of the two turbines, located 27 miles offshore, is expected to begin later this spring and they are expected to enter service by the end of the year. Onshore construction for the pilot project began last year in June to facilitate the interconnection of the turbines at a company substation near Camp Pendleton.

The CVOW pilot project was first announced more than two years ago and received approval in November 2018 from the State Corp. Commission. The construction process is on a strict timetable, in order to minimize environmental impacts to the sea bottom and aquatic life.

Also this month, Dominion Energy is conducting ocean surveys to map the seabed of the 112,800-acre lease area where the company’s 2,600 MW CVOW project will be built beginning in 2024. These surveys will help the company determine potential impacts to ocean and sea life and will support the development of the project’s Construction and Operations Plan to be submitted to the Bureau of Ocean Energy Management (BOEM) later this year.