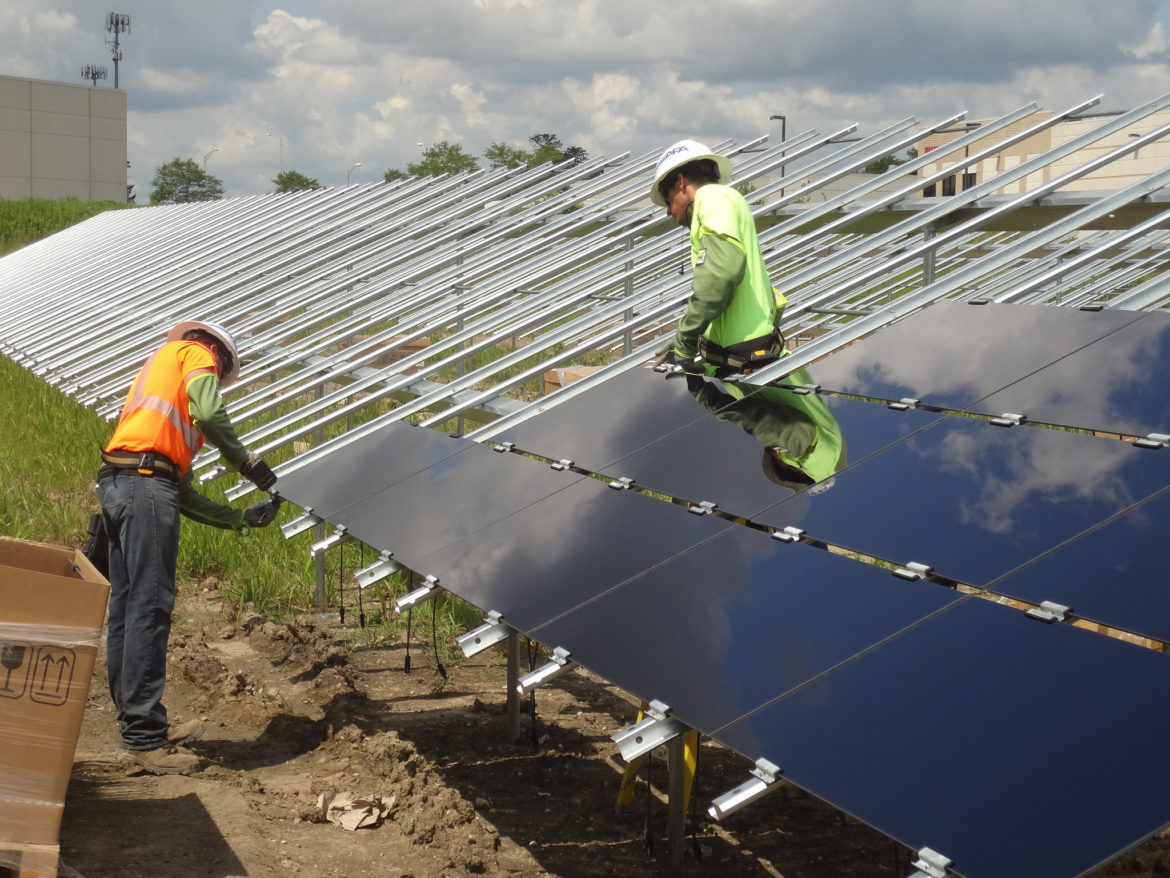 An industry group’s report last week highlights clean energy job losses during the pandemic as well as their potential to rebound with the right policy support.

Advanced energy — including energy efficiency and renewable power  — provide far more jobs than hotels and motels or the retail industry, according to a recent analysis by the business group Advanced Energy Economy.

Yet while there’s been much focus on the pandemic’s effect on those industries, AEE says, not enough attention has been paid to what the government could do to protect and bolster advanced energy jobs.

AEE and other experts also note that advanced energy jobs have much potential to help communities including rural residents and people of color most impacted by the pandemic’s health and economic effects.

The group is highlighting Illinois — where energy legislation is being drafted — as an example of how policy changes could position clean energy to help lead the economic recovery from the pandemic.

But 2019’s job growth was wiped out even in the early days of the coronavirus, with more than 100,000 advanced energy jobs lost just by March of 2020, according to BW Research, a firm with whom AEE works.

BW Research’s analysis in mid-September showed that while the clean energy sector added 13,600 jobs in August, that job recovery lagged behind other sectors like government, hospitality, health care and education. There are still almost half a million clean energy workers out of a job since the pandemic began. BW Vice President Phil Jordan said that after such a big loss, the less-than-1% clean jobs recovery seen recently is not encouraging.

“This is certainly the largest clean energy job loss we’ve seen ever,” Jordan said. “The alarming thing for me is that despite the fact that the economy has largely reopened, there’s little rebound. There are not many activities you’re forbidden from doing or even heavily discouraged from doing, and virtually none of those are related to clean energy. There are still some places you can’t go to the gym or can’t eat inside, but there are no government restrictions or even guidelines that say you can’t put solar on your roof or winterize your home. Yet we’re not rebounding. These [clean energy] jobs are looking to be permanent losses rather than temporary ones.”

“The geographic differences are largely driven by two things — when the virus hit and how severely it hit and the associated shutdowns, and the industry mix,” Jordan said. “Certain segments were more heavily impacted. Utility-scale solar and wind is much less impacted and rebounded faster than residential and even commercial energy efficiency.”

Jordan noted that Michigan’s loss included the impact on auto manufacturing, which includes clean vehicles. He said Illinois fared better than other Midwestern states — despite high coronavirus rates and an aggressive, early shutdown — in part because of its diverse economy.

“Some of the mitigating effect was you have a lot of renewables in Illinois — those projects and the operations and maintenance on those projects have continued apace,” he said. “Illinois has a quite diverse mix of industries and ownership structures. Diversity in anything hedges risk and blunts potential downturns. … Illinois has a lot of different strengths across the value chain — it has R&D, manufacturing, professional services, construction, utilities.”

In Illinois, 137,300 people worked in advanced energy in 2019, more than worked in supermarkets and grocery stores (113,686) and more than twice those in real estate (58,810), according to AEE’s analysis. (While those are federally-recognized employment categories, there is no similar category for advanced energy, so groups like AEE do their own calculations).

Energy efficiency accounted for the largest share of advanced energy jobs in Illinois, at 91,000.

And AEE says that a measure being considered for new energy legislation could mean significant increases in energy efficiency jobs. That would be reversing a clause in Illinois’s 2017 Future Energy Jobs Act that exempts large commercial and industrial electricity customers from required participation in energy efficiency programs run by the state’s utilities.

AEE policy principal Daniel Bloom said that without the large customers participating in energy efficiency programs, the state cannot tap the “low-hanging fruit” of energy efficiency upgrades that could reduce emissions and create many jobs including in the HVAC sector.

“It just makes sense,” Bloom said. Removing the exemption “will lead to an increase in energy efficiency jobs across the entire state of Illinois, including downstate where we have large industrial customers.”

The Midwest Energy Efficiency Alliance has also called for more participation of large commercial and industrial customers in utility-run efficiency programs. Experts note that such customers can be offered a “self-direct” option where they participate in the utility-run programs, but can decide what investments make the most sense to reduce their own energy use.

AEE is a member of the Clean Jobs Coalition, which has pushed proposed legislation known as the Clean Energy Jobs Act. Backers of that and other proposed bills are currently participating in working groups to hash out legislation that many hope will pass in the state’s November veto session.

Bloom said that highlighting how many people clean energy employs compared to sectors like retail, hotels and real estate can help legislators and their constituents understand just how important clean energy is to economic recovery.

“Advanced energy is poised to lead the economic recovery from COVID-19, and that’s getting attention in the governor’s working group process,” Bloom said. “Where we’re headed in Illinois is a really promising direction … but getting the policy right matters.”

Jordan said that while the recession makes it hard for states like Illinois to invest heavily in clean energy, there is much they can do including streamlining regulations to facilitate clean energy development and taking advantage of low interest rates to fund infrastructure.

“The 2009 stimulus showed pretty clearly that clean energy responds really well to stimulus — it creates a lot of jobs and punches above its weight,” he said. “Stimulus focused on energy and infrastructure and decarbonization makes a lot of sense. … It’s a good time for infrastructure investments like grid modernization and energy efficient building programs. I think an area states should be looking really hard at is creating a large capital fund for investing in both advanced HVAC filtration systems and also energy efficiency in public schools and buildings. That could make a big difference.”

Bloom noted that HVAC and other energy efficiency-related jobs tend to be well-paying, often union jobs that could be an option for people laid off in other sectors impacted by the pandemic and related recession, including service and manufacturing.

“If there is an emphasis in legislation on workforce development, you can actually gear [out-of-work people] for a sustainable job that will carry forward for decades,” Bloom said. He said training people in rural and economically depressed areas downstate for energy efficiency jobs can help further the state’s goals of equity in the clean energy economy.

“The situation with COVID shines light on the fact that low-income communities need to be a focal point leading the advanced energy revolution in Illinois,” Bloom said.

He said AEE would also like to see incentives for combined heat and power — where an industrial customer’s excess steam is used to generate electricity on-site — in new legislation. Such installations could create jobs and reduce emissions and peak demand for electricity, Bloom noted. Meanwhile jobs could also be created and emissions and peak demand reduced by advanced transportation investments including using electric buses for energy storage, Bloom said.

He added that reducing peak demand and overall energy demand helps reduce all customers’ bills, which is most beneficial for low-income customers who spend a disproportionate amount of their income on energy.

Jordan also emphasized that equity needs to be central to measures for clean energy economic recovery.

“We do know there are disproportionate impacts across the economy particularly for people who are Hispanic, Latino, Latinx or Black — that’s true in clean energy and energy writ large as well,” Jordan said. “Many of the clean energy proposals that have been floated have the potential to create a great number of jobs in the U.S. It’s really important for us to recognize that if there are disproportionate impacts on specific communities, our proposals to bring jobs back should have emphasis on those communities.”