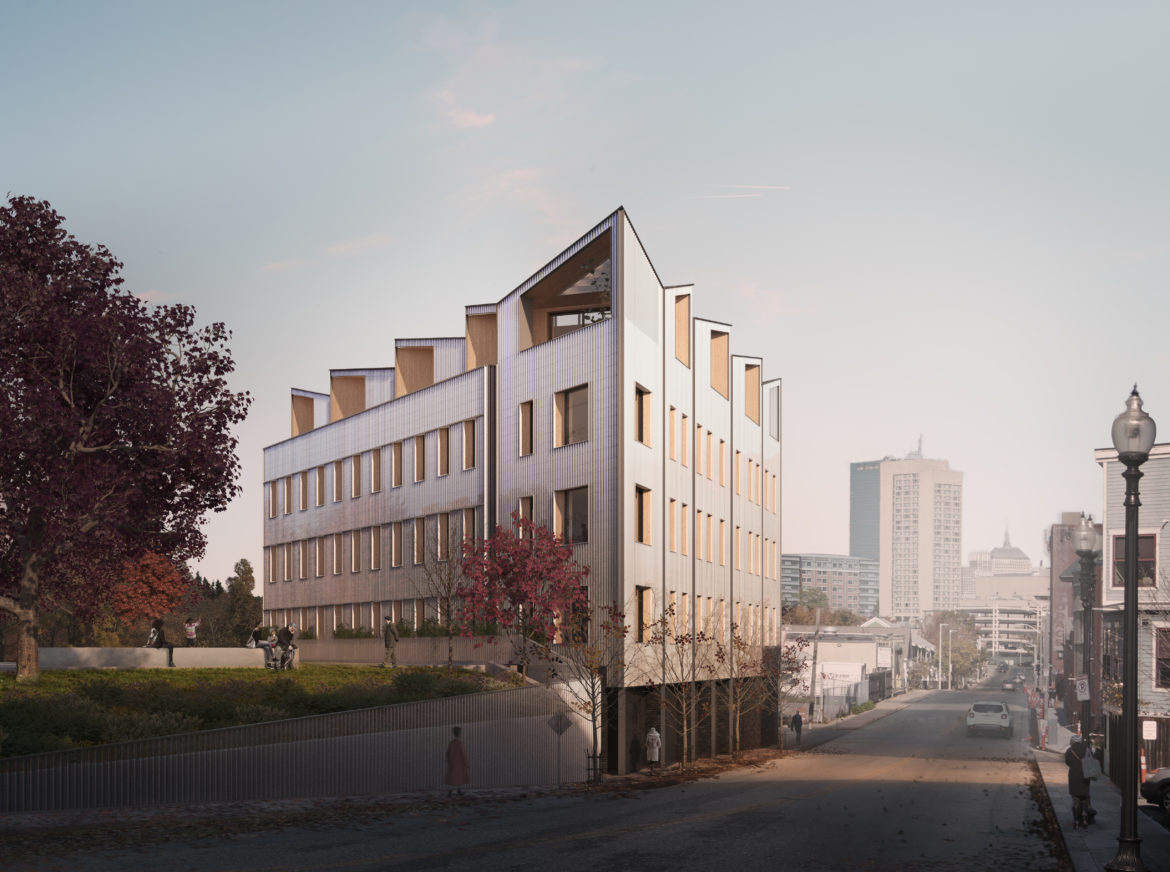 Sustainable engineered wood products are starting to turn up in large-scale construction projects in New England, as architects, developers and institutions look for ways to reduce the building industry’s substantial carbon footprint.

Cross-laminated timber, or CLT, and other so-called mass timber products are viewed as greener than concrete and steel, primarily because the carbon emissions from production of the wooden framing materials is so much lower.

Since the University of Massachusetts incorporated CLT construction to stunning effect in its Design Building on the Amherst campus three years ago, the material has turned up in a number of other large projects, including a new residence hall at the Rhode Island School of Design, in Providence, and an office building under construction in Newington, New Hampshire.

Now, two firms designing an affordable housing project implementing CLT in Boston hope it will become a prototype for sustainable architecture that can be replicated by other developers in housing throughout the city.

“Boston has a very progressive design, engineering, construction and development community, and carbon is the new hot topic,” said John Klein, chief executive officer of Generate Architecture + Technologies, a startup focused on mass-timber building solutions based at the Massachusetts Institute of Technology.

Cross-laminated timber is a very large, prefabricated wood panel. It is formed of several layers of lumber boards, stacked in alternating directions and glued to form one panel. Much stronger than traditional lumber, CLT is suitable for constructing walls, roofs and floors.

First introduced in the 1990s, CLT is widely used across Europe but has only started to catch on in the U.S. in recent years. It is sometimes used in conjunction with some steel or concrete.

Tom Chung, a principal at Leers Weinzapfel Associates, the Boston firm that designed the U-Mass building, said he’s an advocate for three reasons, starting with the environmental benefits.

CLT is a renewable resource, provided that the wood used to make the products comes from a sustainably managed forest, as verified by third-party certification, he said. And the production process is much less carbon-intensive compared to concrete or steel. (The cement sector alone, which is critical to production of concrete, is the second largest industrial CO2 emitter globally, according to the International Energy Agency.)

Second, the CLT is usually exposed in the building interiors, as the wood is aesthetically pleasing. And that adds to a building’s sustainability because construction requires fewer resources — “you don’t have to have additional materials to cover up the structure.”

And finally, because the products are prefabricated in a factory, the process of assembling the building is faster, quieter and results in less construction waste, he said.

“There’s always going to be a place for concrete in buildings — it’s good for foundations. And steel has the advantage for long spans and other complicated geometries of tall buildings,” Chung said. “But mass timber overall makes sense in your typical six- to 12-story building. That’s where it makes the greatest contribution in reducing our carbon footprint.”

The firm has since designed what it says is the largest CLT building in the United States — a 200,000-square-foot residence hall at the University of Arkansas.

“You’re taking wood from the forest and locking that carbon up in the building for the life of the building,” he said. “The carbon that’s stored in the forest is less secure due to the potential for fires, clearing, etc.”

Increased demand for CLT could eventually drive its production in New England. And that, Lowenstein said, would create a financial incentive for landowners to grow the larger trees needed for its manufacture, and enhance now-depleted forests’ carbon-storing capacity.

In Boston, Generate Architecture has partnered with Placetailor, an integrated development, design and construction company focused on carbon-neutral housing, to come up with a replicable prototype for high-density, mass-timber building approaches.

The companies hope to begin construction this summer on a five-story, 14-unit affordable housing development with a ground-floor, affordable coworking space in the city’s Roxbury section.

The digitally designed and digitally fabricated structure is intended to meet passive house and zero-emission standards. It will also serve as “a mock-up of sorts” for other builders to learn from, Klein said.

“The structure is cellular, like a beehive,” he said. “If you cut across you would see this really interesting honeycomb of these plates. You can use them for the walls, the envelopes, the elevator shaft. And once you have one floor up, you can repeat it, one on top of the other.”

“Something that any developer can take and work with — the import of that can’t be overstated,” Booth said. “Boston is setting some very progressive carbon-reduction goals, and projects like this offer them case studies in innovations that are going to help transform construction to align toward those goals.”