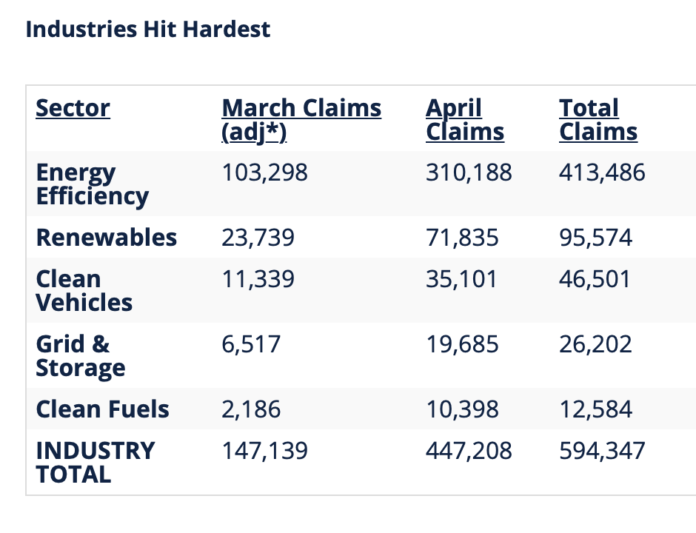 Nearly 600,000 U.S. clean energy workers have lost their jobs since the beginning of the COVID-19 pandemic after 447,208 new workers filed unemployment claims in April – tripling the claims filed in March. That’s according to a new analysis of unemployment data released today by E2 (Environmental Entrepreneurs), the American Council on Renewable Energy (ACORE), E4TheFuture and BW Research Partnership.

The analysis of Department of Labor data found that 594,347 workers in clean energy occupations, representing 17.8% of the industry’s workforce, filed for unemployment benefits in April and March. The number of jobs lost is more than double the number of clean energy jobs created since 2017. Before March, clean energy had been one of the U.S. economy’s biggest and fastest-growing employment sectors, growing 10.4% from 2015 to 3.4 million jobs at the end of 2019. That made clean energy by far the biggest employer of workers in all energy occupations, employing nearly three times as many people as the fossil fuel industry.

In the coming months, the analysis projects that job losses will continue to rise unless Congress and the Trump administration take substantive action to support the clean energy industry and its workers. If nothing is done, the report forecasts that 850,000 clean energy workers will have filed for unemployment by June 30.

A loss of that magnitude would mean that one out of every four clean energy workers employed at the start of 2020 will have lost their jobs in just six months.

“Congress needs to include clean energy in any future economic stimulus package to help stem this massive loss of jobs today and set the foundation for a stronger, cleaner and more resilient economy tomorrow,” he adds.