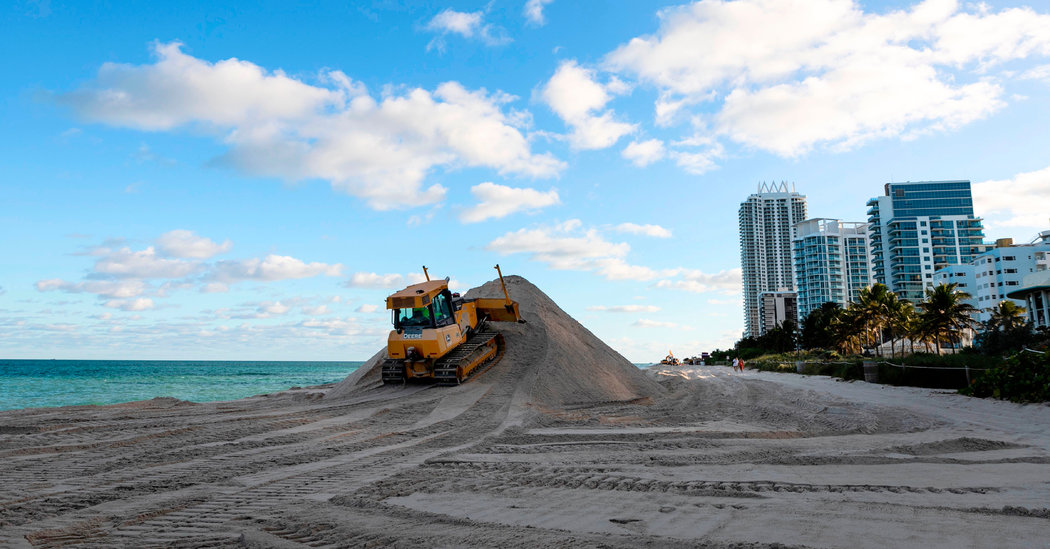 WASHINGTON — The economic toll of the coronavirus is forcing cities and states to redirect money away from projects that provide climate resilience, in a shift that threatens to tackle one crisis at the expense of another.

Officials in San Francisco, Miami Beach and New York City have said they are likely to delay climate-related projects like sea walls because of the virus, which has slashed tax revenue and increased demands for emergency services, housing and other immediate needs. Washington State has cut funding for resilience projects, and people who work on climate adaptation in other cities and states said they worried about similar cuts.

The delays, which officials described as a necessary response to the fiscal straits that many cities are experiencing, come as the cost of natural disasters continue to rise. That threat remains every bit as urgent as it was before the pandemic, experts warned, even if climate change is not in the forefront of the public’s attention.

“I have not seen any projections of sea level rise slowing down as a result of the Covid crisis,” said Brian Strong, chief resilience officer for San Francisco, which is trying to balance the growing cost of the virus with a $5 billion upgrade to its sea wall. At the same time, “there’s only so much money to go around.”

The virus shifting attention away from climate change has surfaced in other ways as well.

Environmental nonprofit groups are bracing for big drops in donations, cutting pay and freezing hiring. Joseph R. Biden Jr., the presumptive Democratic presidential nominee, is focused more on critiquing President Trump’s response to the virus than on climate change. And a Gallup poll this week showed a drop in support for prioritizing the environment over the economy, especially among independent voters.

While public opinion and charitable donations may bounce back once the economy recovers, delaying or canceling infrastructure projects will have long-term effects. Yet the pressure to do so is overwhelming, according to Kathy Baughman McLeod, director of the Adrienne Arsht-Rockefeller Foundation Resilience Center, which works with cities around the world.

“Revenue projections are dropping like crazy,” Ms. McLeod said. “Capital projects are going to be wiped off the books of local governments around the country.”

One of the places facing particular pressure is San Francisco, which was one of the first cities to be shut down in an attempt to slow the spread of the virus. The city expects a budget shortfall of as much as $1.7 billion. “The mayor issued an order to hold off on all projects that haven’t started,” Mr. Strong said. “We’re going over our capital budget right now and looking at what’s essential.”

The sea wall project isn’t on hold yet, Mr. Strong said. But as tax revenue shrinks, there will be more demands on the money that remains, such as finding ways to help protect the city’s homeless population from the virus.

Mr. Strong said San Francisco’s challenge was to figure out how much it has to spend now on climate adaptation projects, without sacrificing the city’s fight against the virus. And both needs keep growing, along with the budget shortfall.

If San Francisco can’t protect its residents and its economy from the coronavirus now, Mr. Strong added, then it will be harder to raise money later for the infrastructure projects it needs to defend against climate change.

Another city where the coronavirus has collided with the demands of climate change is Miami Beach. In 2015, the city began the process of elevating roads that frequently flood because of rising seas, and installing new pumps to control the water.

Miami Beach has done about 20 percent of the neighborhoods on its list, according to Roy Coley, the city’s public works director, and had planned to issue bonds to pay for the next set of projects.

Then the coronavirus hit, shutting down the tourism industry that makes up much of Miami Beach’s economy. The virus is costing the city $3.6 million in lost tax revenue each week. That loss equals more than one-quarter of the city’s total revenue.

Mr. Coley said this was the wrong time to take on more debt, which would mean higher bills on local businesses just when they can least afford it, if they survive at all. “We’re very concerned that some of our businesses will not be able to return,” he said.

Dan Gelber, the mayor of Miami Beach, said he did not think the fallout from the virus would permanently stop the work of protecting his city from climate change.

“What we do going forward is going to depend to a great extent on our financial capacity,” Mr. Gelber said. “That’s a little uncertain right now.”

That pressure is playing out around the country. Gov. Jay Inslee of Washington, who last year sought the Democratic presidential nomination on the strength of his record on climate change, announced this month that he would strip $50 million in climate resilience funding from the state’s budget, along with other cuts.

“None of these were easy decisions,” Tara Lee, a spokeswoman for Governor Inslee, said by email. “None were ones he would have made in a normal situation.”

In New York City, which was crippled in 2012 by Hurricane Sandy, the budget crunch will force some projects to get pushed back, according to Phil Ortiz, a spokesman for the Mayor’s Office of Resiliency. “We expect delays to be inevitable, however at this time it’s premature to predict specific impacts,” Mr. Ortiz said by email.

Many of those interviewed said that if anything was likely to salvage their climate agendas, it would be the federal government, in the form of dedicated infrastructure funds aimed at restarting the economy. Large-scale resilience projects entail hiring large numbers of workers, they said, which is a core goal now that some 26 million Americans have filed for unemployment benefits in the last five weeks.

Shalini Vajjhala, a former Obama administration official who now advises cities on defending against the effects of climate change, said she was already fielding calls from local officials looking to put together “shovel-ready” resilience projects that could start hiring workers right away and that might qualify for a future stimulus package.

“If we wait until the money is available, it’s going to be oversubscribed,” Ms. Vajjhala said.

If cities and states don’t find a way to continue their work on resilience, they will set themselves up for even worse consequences later, warned Laura Lightbody, head of the Flood-Prepared Communities project for the Pew Charitable Trusts.

“Without resilience planning, systems and infrastructure already spread thin may not be able to respond effectively to the next big flood,” Ms. Lightbody said. “Natural disasters won’t wait until this pandemic has run its course.”