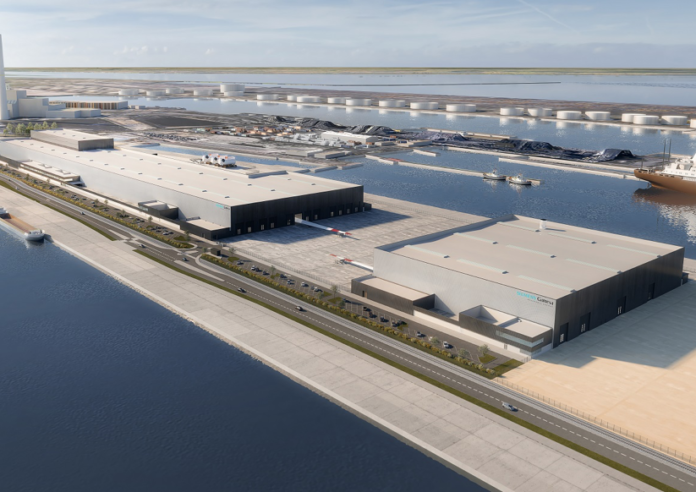 EDF Renewables, Enbridge Inc., a North American energy infrastructure company, and wpd, a European renewable energy company, have launched the Fécamp offshore wind farm following the finalization of financing agreements between the consortium and its financial partners during the weekend.

Royal Boskalis Westminster N.V. (Boskalis), in consortium with Bouygues Travaux Publics (Bouygues) and Saipem, has been awarded the design work, construction and installation scope for 71 concrete gravity-based structures (GBS) as the foundation for the Fécamp offshore wind farm in Normandy, France. The award was made by Eoliennes Offshore des Hautes Falaises (EOHF). The contract carries a total value of €552 million and the contract value split being 40.5% (Bouygues Travaux Publics), 40.5% (Saipem) and 19% (Boskalis).

The foundations will be constructed in the Bougainville maritime works yard in the Grand Port Maritime of Le Havre and will be transported by barge to the offshore wind farm site. The works should be completed by the end of 2022. The commissioning and operational start-up of the wind farm are planned for 2023.

The 500 MW Fécamp offshore wind farm will be comprised of 71 wind turbines located between 13 km and 22 km from the coast of northwest France. The power generated by the wind farm will provide enough annual electricity to meet the power needs of over 60% of the Seine-Maritime department’s population. The construction of the project will create over 1,400 local jobs. During its 25-year service life, approximately 100 local ongoing full-time jobs based at the port of Fécamp will also be created to maintain the wind farm.

The total project capital cost is estimated to be €2 billion, of which the majority will be financed through non-recourse project-level debt. Fécamp offshore wind farm is underpinned by a 20-year power purchase agreement (PPA) granted by the state in June 2018.

“I am delighted to announce the construction of the second French offshore wind farm in Fécamp. I want to salute the professionalism of our teams and the mobilization of local stakeholders who have been working for years together to meet the energy and economic challenges facing the Normandy area,” says Bruno Bensasson, CEO of EDF Renewables.

“With already four offshore wind projects won in France and two currently under construction, EDF is thrilled to have contributed to the creation of an industrial sector that creates value and employment for the territories,” he adds.

This project has been guided by extensive consultation carried out over 10 years with local stakeholders (state services, elected officials from the region, coastal municipalities and non-government organizations) and is supported by in-depth environmental studies undertaken with local environmental associations. Specific work was also carried out in close collaboration with the fishing industry to ensure the coexistence of various maritime activities on the site.

To carry out this project, EOHF has selected internationally recognized companies in the fields of civil engineering and construction, dredging, offshore installation and maritime works. With this unique combination of expertise, the consortium partners are confident to successfully deliver and contribute to the energy mix diversification program in France.

Photo: Siemens Gamesa selected a consortium – led by GTM Normandie-Centre – for the construction of its offshore wind turbine plant in Le Havre