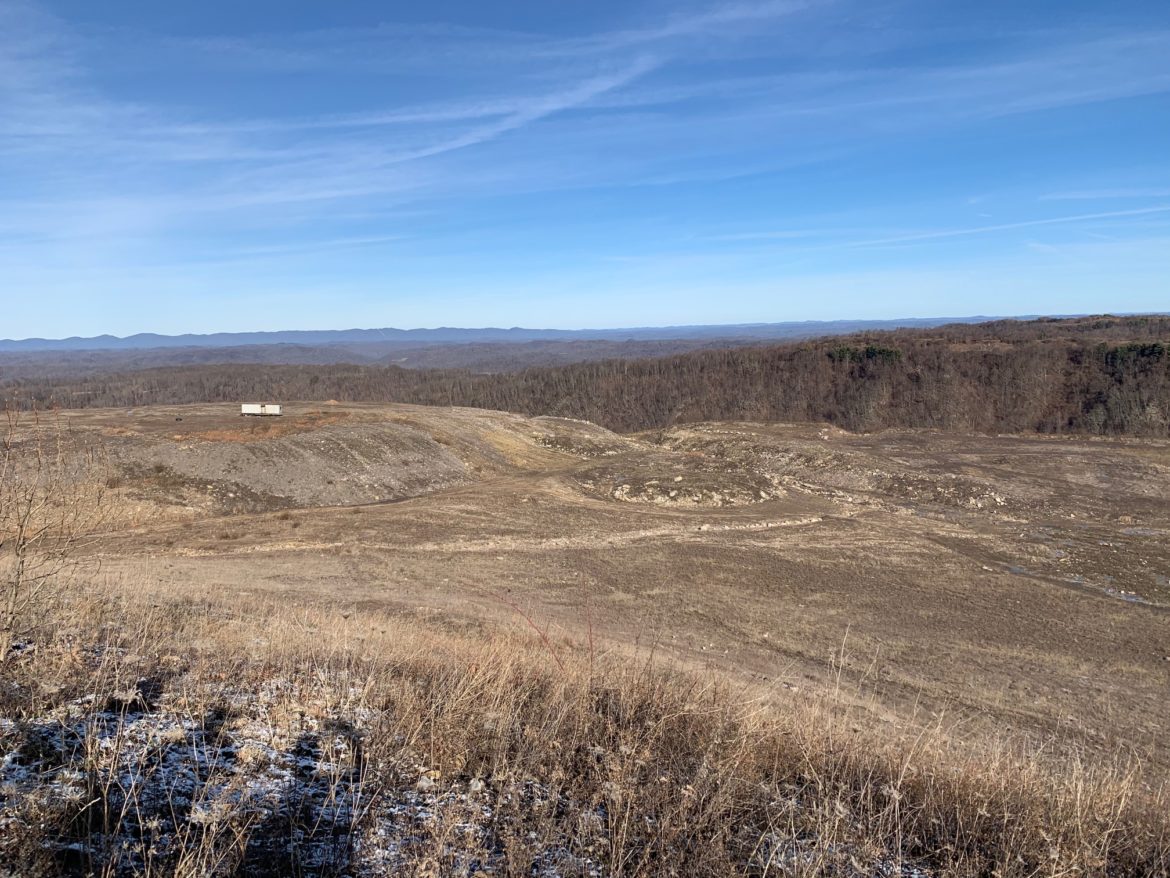 One former surface mine site in Dickenson County, Virginia, within the boundaries of Central Appalachian forestlands acquired by the Nature Conservancy.

The Nature Conservancy is seeking a partner to help develop solar on up to 13,000 acres of cleared minelands.

As a steward of Appalachia’s lands and waters, Brad Kreps is fluent in the language of the region’s rivers, trees and the unique creatures that call them home.

His vocabulary is far more limited, however, when it comes to the intricacies of installing viable solar energy within that landscape.

That gap prompted the Nature Conservancy employee to invite experts to join his nonprofit’s evolving conversation about turning retired and abundant mined lands in southwest Virginia — and beyond — into renewable energy generators.

“Our strength is the protection and management, with a focus on forests and wildlife,” said Kreps, director of the nonprofit’s Clinch Valley Program in Abingdon, Virginia. “We know enough about solar to know that to be successful we need developers to help us unlock the potential.”

An estimated 13,000 acres of cleared minelands pock a diverse 253,000-acre Cumberland Forest property in Virginia, Kentucky and Tennessee that the conservancy acquired last year. Some 153,000 of those acres are in the traditional coal counties of Wise, Dickenson, Russell and Buchanan in Virginia.

“We’re in the first phase of finding a development partner that’s the right fit for us,” Kreps said about a recently released request for qualifications from private solar companies. “When we eventually find a partner or partners, we can look at these sites and get down to the level of detail we need.”

Not all 13,000 acres will be appropriate for panels. Some parcels are likely too small, too sloped or too far away from infrastructure such as transmission lines to carry electricity to the grid.

And, while utility-scale solar is the aim, these would not be mega-farms because most mined sites are between 100 and 300 acres. A back-of-the-envelope calculation shows each could produce between 10 and 30 megawatts.

Big or small, Adam Wells, the regional director of community and economic development for Appalachian Voices, is thrilled the conservancy is pursuing a second life for land too often cast aside as unusable.

In 2016, Wells spearheaded the formation of the Solar Workgroup of Southwest Virginia to figure out how to incorporate renewable energy into an economic transition in the state’s seven coalfield counties.

It’s a coalition of nonprofits, community action agencies, colleges, state agencies and planning district commissions. Workgroup members are in the midst of jump-starting more than a dozen rooftop solar projects stalled by a number of obstacles.

“The notion of solar farms being part of a reclamation plan has been flirted with for years and years,” said Wells, a Wise County native. “I’m not sure it has ever gotten out of the ‘that’s a nice idea’ phase.”

Wells, who has invited Kreps to the workgroup table, is confident that the conservancy will be able to execute its concept.

“Having a motivated landowner like the conservancy is a game-changer,” Wells said.

He and other solar advocates also see potential advances with legislation that Democratic Gov. Ralph Northam recently signed and a separate measure that has yet to be green-lighted by the General Assembly.

“The conservancy is a juggernaut of a worldwide organization that knows what it’s doing,” Wells said about his eagerness to support the organization’s solar efforts. “They are good at what they do and I expect them to do it really well.”

‘It’s about nature and people’

The conservancy has had a presence in southwest Virginia since the early 1990s, but its footprint was a much smaller 40,000 acres until 2019.

Investing in a quarter-million Cumberland Forest acres is one of the biggest projects pursued by the nonprofit in the eastern U.S. during its seven decades of existence.

To acquire the property, the conservancy used a private equity-style fund structure that included investments internally and from roughly 24 individuals, foundations and managers. The fund also raised $20 million in debt from the Doris Duke Charitable Foundation and another $20 million in debt from Virginia’s Clean Water State Revolving Loan Fund.

The region’s signature biological richness prompted the conservancy to act so boldly. Not only is it a major migratory corridor, but its forests and streams have one of the highest concentrations of rare and imperiled species on the continent.

For instance, Kreps noted, 500-plus miles of headwater streams that feed into the Clinch River in southwest Virginia support 20 threatened mussel species and more than 130 types of fish.

While protecting wild areas is his organization’s wheelhouse, such a mammoth landscape also demanded a more expansive objective.

“It’s about nature and people, that’s the key,” said Kreps, who has forged local relationships during his 19 years with the Virginia chapter of the conservancy. “The idea is helping southwest Virginia and Central Appalachia to renew and  diversify its economy.”

Success hinges on achieving three ambitious and interwoven goals, Kreps said. Conservation with the looming threat of climate change is the first and overarching one.

Second is yielding a positive financial return to show partners that investments in nature such as leasing land for solar projects, practicing sustainable forestry and sequestering carbon in intact trees are smart business decisions.

And third is returning value to local communities with a boost in jobs, training opportunities, tourism and outdoor recreation.

“Renewable energy is one component,” Kreps said. “Our big goal is to conserve Appalachian forests from Alabama to Canada, which isn’t possible if we don’t test these new models. We have to up our game.”

Actually placing solar developments on deforested minelands is so new that there’s no specific winning formula for it. Kreps is seeking ideas.

Wells and his solar workgroup team pioneered one method by writing a grant to tap into federal money that targets redevelopment on old mine sites in southwest Virginia.

That led to the state Department of Mines, Minerals and Energy awarding $500,000 in 2019 to a project in Wise County that partially powered on-site data centers with a new solar array. The 3.5 MW project was designed to decrease the centers’ operating budget as well as peak-load demands on the local distribution grid.

Appalachian states began receiving federal money from what’s known as the Abandoned Mine Land Pilot Program in 2016. It’s funded through the U.S. Treasury.

Wells wants to replicate that initial success story by continuing to draw upon the pilot program as the conservancy comes up to speed on solar.

“That concept could be expanded,” he said. “It’s another way to scale up.”

More than 100,000 acres have been affected by coal mining in Virginia, according to state figures. That number doesn’t include brownfields. Mineral mining (non-coal) has impacted another 40,000 acres.

DMME, the state agency that regulates mines, houses an extensive mapping system detailing the boundaries, history, topography, size, and soil and water data for each mine site. Renewable energy developers can use that information for guidance.

For example, one January map identifies 10 of the top sites for potential solar development on the conservancy property.

A different map from February casts a wider net by identifying sites across Virginia’s Appalachian coalfields that could be suitable for solar arrays. “The map and model from our analysis show that there is great potential for solar development on previously mined land,” the final slide concludes.

Without incentives, solar a tougher sell

Solar advocates are heartened by a provision in the all-encompassing Virginia Clean Energy Act — which takes effect July 1 — that requires Dominion Energy to procure 200 MW of solar or wind on brownfields, coal-mined lands and other previously developed sites such as parking lots by 2035. It allows the utility, the state’s largest, to venture outside its service territory boundaries to do so.

Dominion, which is making strides on solar, did not respond to requests for comment for this article.

Virginia’s other major investor-owned utility, Appalachian Power, serves a broad swath of Virginia’s coal country. Spokesperson Teresa Hamilton Hall said the company is “supportive of the great job the folks at the Nature Conservancy’s Clinch Valley Project are doing in gathering data on reclaimed mine sites.”

While the utility hasn’t ruled out installing solar on brownfields or minelands, she said land costs, zoning laws, taxes and proximity to distribution and transmission lines for any potential site must be analyzed.

Separately, Appalachian Power is in the midst of reviewing proposals for up to 200 MW of solar energy in its territory. Those bids are tied to solar measures included in a 2018 law called the Grid Transformation and Security Act.

The conservancy had joined Appalachian Voices and other groups in backing a bill nicknamed the Brightfields Act (HB 754), which didn’t make it out of committee in this year’s session.

Briefly, it called for the state Department of Mines, Minerals and Energy to administer a fund and program that awards grants to renewable energy projects located on brownfields or previously coal mined lands. The amount granted was based on the energy capacity of a project.

“This really would have opened the door and it had immense bipartisan support,” Wells said about the bill introduced by Republican Del. Terry Kilgore, who represents the area near Cumberland Gap.

“Why did it still die? Probably because of all that new spending it required. We need to figure out a way to fund it so it doesn’t cost Virginia taxpayers.”

Lena Lewis, the energy and climate policy manager for the conservancy’s Virginia chapter, said renewable energy companies are likely to avoid the extra expense of developing on compromised lands without incentives.

“We’re trying to demonstrate the feasibility of this idea in the Cumberland Forest,” Lewis said. “Our hope is that others can be inspired by it and can say yes, let’s do more of this.”

Kreps emphasized that it’s crucial to link with solar developers that share the conservancy’s values of sustainability and commitment to  community.

“We’re optimistic and we feel like we bring a lot to the table,” he said. “We should have a strong project, it will just take time.”