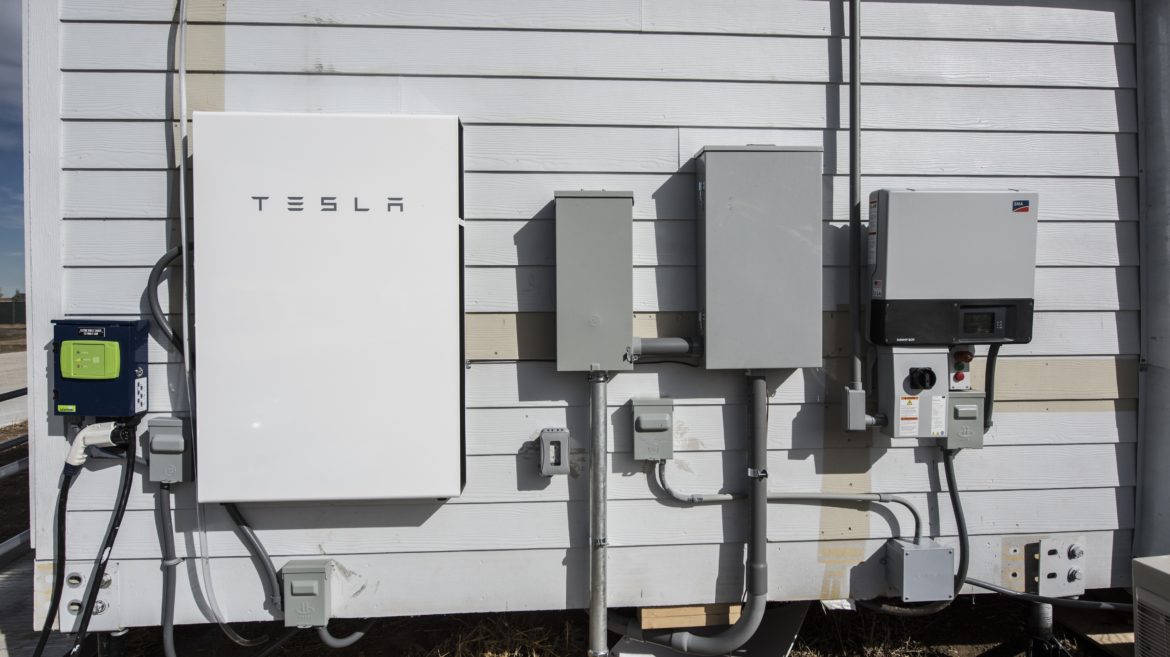 A home battery inverter set up.

A proposal by the state’s Public Utilities Regulatory Authority is designed to drive the deployment of 580 megawatts of energy storage capacity by 2030.

Connecticut utility regulators are proposing the state’s first electric storage program, hoping to get batteries widely deployed to serve both as emergency backup power in ratepayers’ homes and virtual power plants that can feed the grid during times of peak demand.

The “straw proposal” released by the Public Utilities Regulatory Authority last week outlines a nine-year program of upfront incentives that will reduce the cost to purchase and install a storage system, which is typically paired with solar. The batteries must be tied to the grid and pre-programmed to automatically store and dispatch solar energy during summer peak periods.

Customers who allow the utilities to actively dispatch their storage systems during demand response events would also receive compensation in the form of an annual performance incentive.

The incentives are designed to drive the deployment of 580 megawatts of storage by 2030, a target that “signals a meaningful commitment” to the technology and “would place Connecticut among the leaders in storage programs in the Northeast,” said Sean Burke, a policy associate with the Northeast Clean Energy Council, a nonprofit representing clean energy companies.

The storage program is one of the first proposals to emerge from the regulatory authority’s grid modernization docket, a wide-ranging proceeding aimed at making the grid more efficient, resilient, and equitable. It comes after more than a year of study and is based largely on input from the Connecticut Green Bank and utility Eversource, which already operates a battery storage demand response program in Massachusetts.

Linking batteries to the grid enables them to help supply power in high demand periods, when electricity prices are higher. Displacing some of that demand helps reduce pricing in the regional markets, a cost-saving benefit that accrues to all ratepayers, said Bryan Garcia, the president and chief executive of the Green Bank.

Public Utilities Regulatory Authority Chair Marissa Gillett has actively sought input from a range of stakeholders, and “recognizes that there’s existing statutory ability to support battery storage technology to provide ratepayers with benefits that thus far have not been realizable,” Garcia said.

The proposal highlights the need to prioritize storage systems for the state’s “most vulnerable citizens,” in light of the hardships caused by the extensive and prolonged power outages that followed Tropical Storm Isaias last year.

It directs the Green Bank and the utilities to study how best to deliver systems to customers in economically distressed and environmental justice communities, in medical care facilities, in facilities deemed “critical” by public officials, and to those who live at the grid edge and typically experience longer outages.

The upfront incentives, which will be administered by the Green Bank, will be set in three-year cycles. During the first cycle, the incentive would average around $3,750 per customer to start, with the highest incentives for low- to moderate-income households, and then gradually decline in four step-downs to an average of $1,750. (Commercial and industrial customers are eligible as well.)

Those incentive levels were developed by the Green Bank based on incentive programs in neighboring states and an extensive survey of Connecticut residential solar customers asking how much of an incentive would entice them to add a storage system, Garcia said. The survey assumed an $11,000 system cost.

The performance incentive payments would be based on the average kilowatts a battery contributes per demand response event. In Eversource’s program in Massachusetts, a typical home battery earns $1,125 for the summer season, and $250 for the winter, according to the company’s website.

The proposal also allows for third-party ownership of the storage systems, meaning a solar developer may own the asset. That opens the way for leasing programs like the one offered by Sunrun, a San Francisco-based solar company that has installed some 13,000 paired solar and battery systems nationwide.

About 80% of those customers chose the company’s leasing plan, which requires a modest monthly payment with no money down, according to Christopher Rauscher, director of public policy.

“A big part of our business now is aggregating those batteries with software and dispatching them for the benefit of the grid and all ratepayers,” Rauscher said. “When you have a company like Sunrun that owns and manages the battery, we can maximize the value of that battery.”

Rauscher said the straw proposal is “right in line” with market-leading incentive programs in the region and nationwide.

The utilities will be able to recover the cost of the program through rates. But a cost-benefit analysis conducted for the Green Bank concluded that the program is net beneficial for ratepayers.

The Public Utilities Regulatory Authority is accepting comments on the proposal through Jan. 26 and will hold a hearing in February. A draft decision is expected at the end of March. The program is anticipated to begin on Jan. 1, 2022.