The widespread and prolonged power outages that trailed Tropical Storm Isaias this month have added urgency to what was already a fast-and-furious effort to begin modernizing Connecticut’s electric grid. 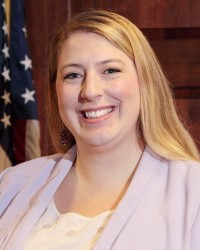 Even amid the pandemic, Marissa P. Gillett, who took over as chair of the state’s Public Utilities Regulatory Authority (PURA) last year, has kept the grid modernization docket moving at a rapid-fire pace, issuing requests for proposals and holding virtual listening sessions in multiple subject areas, including energy storage, advanced metering, electric vehicles, and energy affordability.

“Grid modernization is about more than modernizing the grid,” she said. “It’s also thinking about the way we regulate the utilities and invite third parties into the conversation. A lot of that is thoroughly needed, and I imagine a lot of ratepayers and businesses feel the same way after going through the storm.”

Gillett, who previously worked in regulatory affairs in Maryland, has taken a decidedly tough tone with the utilities since the storm, which left hundreds of thousands of residents and businesses without power for days. In an Aug. 6 press release announcing PURA’s investigation into the utilities’ response, Gillett declared that she is not interested in “their excuses,” is committed to “reforming the utility landscape in Connecticut” and “will not settle for anything less.”

Asked to respond to those comments, United Illuminating spokesperson Edward Crowder said they are open to a “robust dialogue” about how to improve storm readiness, but believe the investigation will conclude that the utility’s response was consistent with “our PURA-approved storm plan.”

Likewise, Eversource spokesperson Mitchell Gross said that while the utility understands customer frustrations and will “fully participate” in the regulatory authority’s review, the restoration of power after this storm was actually completed 33% faster than after Superstorm Sandy and Tropical Storm Irene, even though the damage was more severe.

Even before the storm, Gillett had signaled that, under her watch, it’s PURA, not the utilities, who are in charge.

Last February, she warned the utilities that they were moving too slowly in getting processes in place to sign up and issue credits to qualified subscribers in the state’s new shared solar program, and said PURA would impose fines if the companies did not meet the next deadline for submitting more detailed plans.

Last week, the authority did just that, fining the companies $10,000 each for what it viewed as another set of insufficient filings that amounted to only “a rough sketch” of customer enrollment processes.

“Back in February when we met with the utilities on their substandard filings, we made it clear that we had a set of expectations,” Gillett said. “I followed through on what I said I was going to do. I feel very strongly that I need to hold myself accountable and PURA accountable before I can have any measure of hope at holding the utilities accountable.”

Spokespeople for both utilities said the companies are committed to the program.

PURA also temporarily suspended a delivery fee increase approved for Eversource that caused an uproar among ratepayers when it went into effect in July. The authority is reexamining the rate adjustment “to ensure that Eversource is not over-collecting revenues in the short term at the expense of ratepayers during this period of financial hardship.”

Renewable energy advocates in Connecticut say they are pleased with the new tone at PURA.

“We have nothing to say other than kudos for the great job this commissioner is doing,” said Amy McClean, Connecticut director for the Acadia Center. The advocacy community has “been pleasantly surprised by the unafraid approach to tough issues that need to be addressed. We cannot keep doing business as usual.”

Gillett has also garnered praise from the Connecticut Industrial and Energy Consumers, which represents large commercial and industrial ratepayers. At a recent listening session hosted by PURA on energy affordability concerns among those ratepayers, the organization’s attorney, Amanda De Vito Trinsey, thanked Gillett, saying, “I do work in a lot of states, and it’s unprecedented for a commission to spend this much time looking into C&I affordability as a category.”

The so-called “grid mod” docket that is the focus of so much of PURA’s attention these days is not new — it dates to 2017. But Gillett supercharged what had been a slow-moving process shortly after her arrival, setting up what are now 11 sub-dockets moving on their own tracks.

“The Connecticut grid mod docket stands out in terms of its breadth and pace, especially at this moment in time,” said Sean Burke, a policy associate at the Northeast Clean Energy Council, which is a participant in the energy storage sub-docket. “They are looking at a whole host of issues in a rapid environment, and taking in a lot of stakeholder feedback.”

In response to a PURA request for proposals for program designs for energy storage earlier this year, the clean energy council, in partnership with the Energy Storage Association, submitted a proposal that would allow for compensation of third-party providers of storage resources.

“The utility would call on storage resources that have signed onto a utility tariff, and those resources would be compensated for performing during the time the utility is asking them to perform,” Burke said.

Energy storage is one of many areas in which PURA believes it can begin implementing changes on its own, without waiting for a legislative nod, Gillett said. She and her staff will sift through all the storage proposals submitted, then come up with one comprehensive proposal “that will put Connecticut on the map for having an energy storage market, because we don’t have one right now.”

PURA is also prioritizing the expanded use of advanced metering, which can provide real-time data on usage and outages, and the creation of reliability and resilience program metrics and performance targets, she said.

While the sub-dockets are operating on different timeframes, all of them should wrap up by the end of 2021, in time for the utilities to incorporate the outcomes of those dockets in their comprehensive distribution plans due in 2022, she said.

Both utilities have submitted detailed plans for how they might transition to an advanced metering infrastructure in the coming years, in response to another PURA request for proposals. The timing is right for Eversource, as more than 800,000 of the company’s electrical meters will be 20 years or older in the next five years, Gross said.