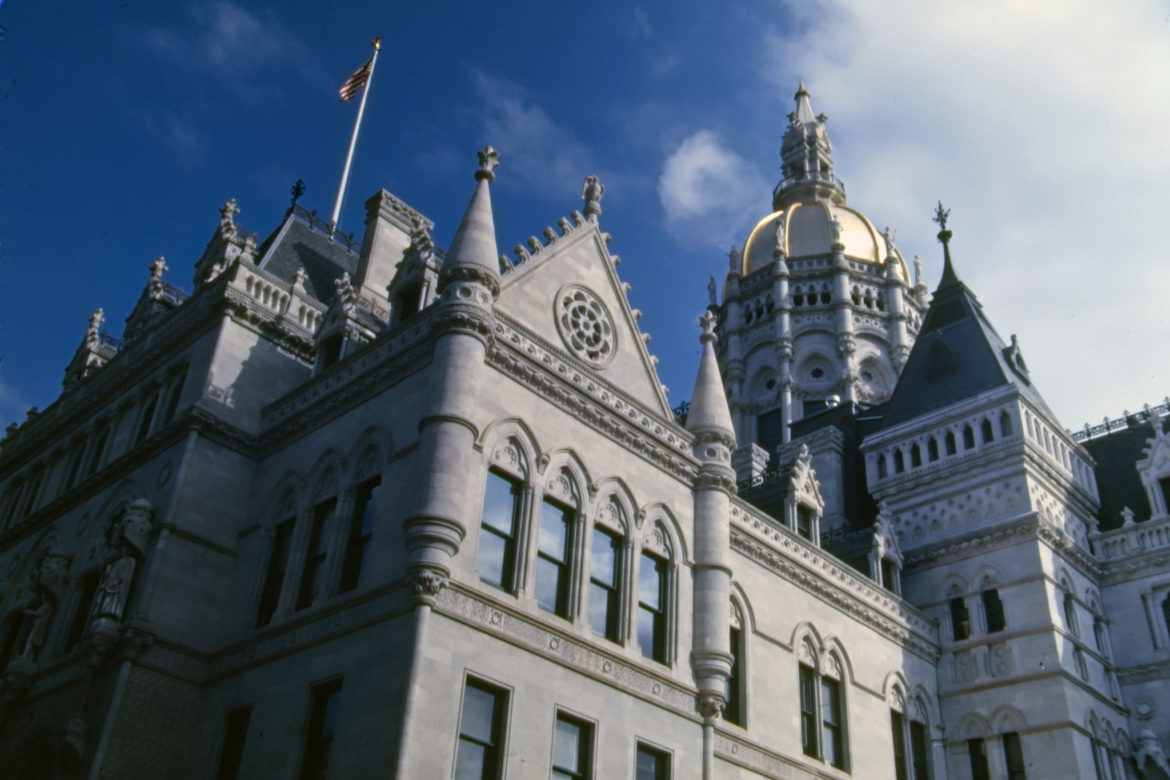 The Connecticut Statehouse in Hartford.

Opponents of the project say the two processes are working at cross-purposes, and it’s time the Lamont administration resolved the conflict.

Environmental activists joined with a few state lawmakers Tuesday to repeat their demands that the administration find a way to stop the 650-megawatt facility, called the Killingly Energy Center.

“This power plant not only doesn’t meet the energy needs of Connecticut — there’s actually no evidence that this energy is necessary to meet any sort of demand through ISO New England,” the regional electricity grid, said state Sen. Mae Flexer, whose district includes the town of Killingly. “And it clearly does not fall in line with our targets in Connecticut for moving toward green energy.”

The long-embattled project, being developed by Florida-based NTE Energy, was approved by the Connecticut Siting Council in June 2019, after the developer had secured a future power generation commitment from ISO New England. The siting council pointed to that seven-year capacity supply obligation as proof that the power plant is needed.

But environmentalists have questioned the region’s need for another gas-burning plant, especially at a time when states are making strides on ramping up renewables and efficiency efforts.

A draft subcommittee report under review by the Governor’s Council on Climate Change acknowledges as much, saying that the Killingly plant “does not align with Connecticut’s decarbonization policy objectives; and its long asset life will make it challenging to meet the state’s emissions reduction goals.” A final report from the council is due in January.

ISO New England has come under criticism for not sufficiently taking into account individual states’ renewable energy goals in its grid management. In October, Lamont joined four other New England governors in calling for reform of the grid operator’s regional electricity market design, transmission planning and governance. At the time, Lamont, who has set a target of 100% clean energy by 2040, said the ISO-NE system had “actively hindered our efforts to decarbonize the grid.”

All the while, the Killingly plant has continued to move through the approval process. Activists say it is incumbent upon the governor to stop it.

“We want him to take some ownership over this issue,” said Louis Rosado Burch, Connecticut program director for the Citizens Campaign for the Environment. “We’ve heard from him a number of times that he is doubtful of the need for Killingly. We are calling upon him to exercise the power he has at his disposal — whatever those levers might be — to intervene in that process.”

Rosado Burch said opponents have collected almost 6,000 petition signatures from Connecticut residents in support of ending investments in fossil fuel infrastructure and boosting investments in energy efficiency. The governor should be expecting those petitions by mail, he said.

Approvals for the Killingly plant are still pending on a number of fronts. The state Public Utilities Regulatory Authority is reviewing an application from Yankee Gas (owned by Eversource) for approval of a natural gas service agreement between the company and NTE Energy.

A wastewater discharge permit is pending before the state Department of Energy and Environmental Protection, as is an application from Eversource for a water quality certification related to the installation of a pipeline for the plant,  according to agency spokesperson Will Healey.

Sierra Club Connecticut has opposed that certification, arguing in written comments that the pipeline’s path will run through a number of wetlands and the habitats of endangered species.

“DEEP could decline it — we provided lots of reasons why they could,” said Samantha Dynowski, the group’s state director.

Department Commissioner Katie Dykes has publicly expressed frustration with the project. During an informational forum before the legislature’s Energy and Technology Committee earlier this year, she noted that it was the ISO capacity market that moved the plant forward, “not any procurement or contract or selection decision coming out of the state of Connecticut.”

On Thursday, DEEP released its draft Integrated Resources Plan, an assessment of the state’s future electric needs and how best to meet those needs. The plan concludes that the state can achieve a carbon-free electric supply by 2040, but cites reform of ISO New England as key to achieving that goal.

“The wholesale markets on which Connecticut relies need to be aligned with our state’s clean energy goals,” and renewable resources must not be “prevented from competing with conventional fossil resources because of antiquated market designs,” the report says.The agency is accepting public comments on the draft report through Feb. 15.