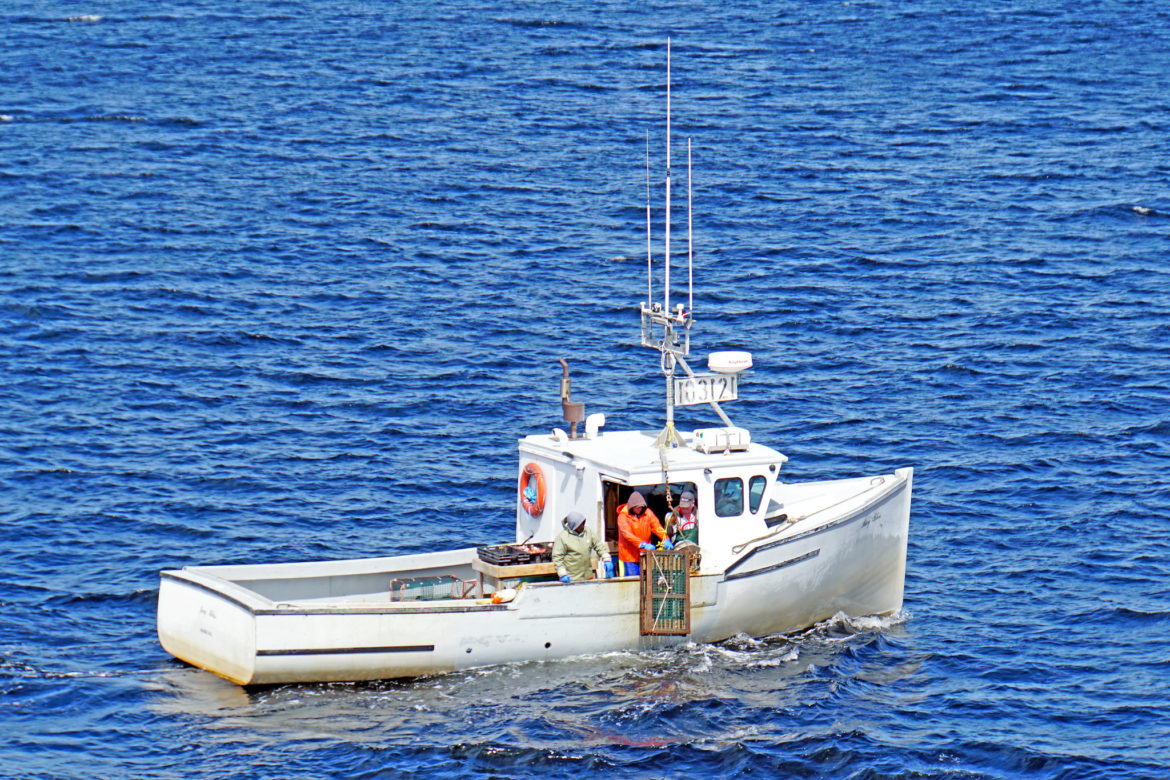 Lobstermen lift a trap on board.

Recent research concluded that construction of 35 wind turbines in the North Sea had no impact on the area’s lobster fishing grounds.

In New England, offshore wind developers and the fishing industry continue to grapple with questions over potential impacts on the region’s valuable fisheries.

A recent European study not only offers good news on that front, it also provides a template for how the two industries can work together.

Research conducted over a six-year period concluded that the 35 turbines that form the Westermost Rough offshore wind farm, about five miles off England’s Holderness coast in the North Sea, have had no discernible impact on the area’s highly productive European lobster fishing grounds.

The overall catch rate for fishermen and the economic return from those lobsters remained steady from the study’s start in 2013, prior to the wind farm’s construction, to its conclusion last year, according to the lead researcher, Mike Roach, a fishery scientist for the Holderness Fishing Industry Group, which represents commercial fishermen in the port town of Bridlington, England.

“It was quite a boring result,” Roach joked. “All my lines are flat.”

Ørsted, the Danish energy giant and developer of the wind farm, contracted with Holderness’ research arm to carry out the study, as the group has its own research vessel. And that collaborative approach, Roach says, has made the findings all the more credible to local fishermen, who were initially certain that the project would destroy the lobster stocks.

“We did the research the same way a fisherman would fish — the same gear types, same bait, deploying in the same way,” he said. “We were basically mirroring the commercial fishing method in the area. And that has allowed the fishermen to relate directly to the fieldwork.”

Hywel Roberts, a senior lead strategic specialist for Ørsted and a liaison with the researchers, called the collaboration “a leap of faith on both sides to join together and agree at the outset to live and die by the results.” He noted that the level of research also went well beyond what was required for government permitting.

Ørsted announced the study’s results last month in a brief press release, even as Roach is still in the process of getting the research approved for publication in a peer-reviewed journal.

It’s no wonder the wind developer was eager to share the news more widely, as the fishing industry has proven to be a powerful force in slowing the progress of wind farm development along the United States’ Northeast coast.

Last year, the Bureau of Ocean Energy Management announced it was pausing the approval process for Vineyard Wind 1, a joint venture between Copenhagen Infrastructure Partners and Avangrid, to be constructed off of Martha’s Vineyard. The agency said it wanted to devote more study to the cumulative environmental effects of the many wind projects lining up for approval.

In June, the agency issued a supplemental environmental impact statement concluding that the cumulative impacts on fisheries could potentially be “major,” depending on various factors. The agency is considering requiring transit lanes between turbines in order to better accommodate fishing trawlers, a design change Vineyard Wind argues is unnecessary and could threaten the project’s viability.

The developer has proposed separating each turbine by one nautical mile. The transit lanes would require additional spacing.

A final report is due in December.

The outcome of the Holderness study has “very important” implications for wind projects all over, Roberts said.

“The lobster fishery there is one of the most productive in Europe, and we were tasked with building a wind farm right in the middle of it,” Roberts said. “If it can work in this location, we think it can work in most places around the world.”

Orsted even brought Roach and one of the Holderness fishermen to Massachusetts last year to spread the word to worried lobstermen about the minimal impact at Westermost.

Roach said he’d like to think his findings “eased some concerns” in New England. However, he said he disagrees with Ørsted that the outcome in the North Sea is applicable to other areas of the world, where habitats and the ecology of the species could be very different.

“There are lessons to be learned and guided by, but I can’t say it’s directly transferable,” he said.

Annie Hawkins, executive director of the Responsible Offshore Development Alliance, a U.S. fishing industry group, said she will have to see the published study before forming any opinions about it. However, she agreed with Roach that Ørsted’s willingness to work collaboratively with the fishing industry to conduct research “is absolutely critical to getting people to accept the result and to make sure you’re doing it right.”

Holderness is continuing its research into local fisheries, with some additional funding from Ørsted, and recently built its own lobster hatchery to that end.

“We’d like to understand some of the bigger issues, like ocean warming and how it affects the growth of lobsters,” Roach said. “We’re trying to fill some of the knowledge gaps.”