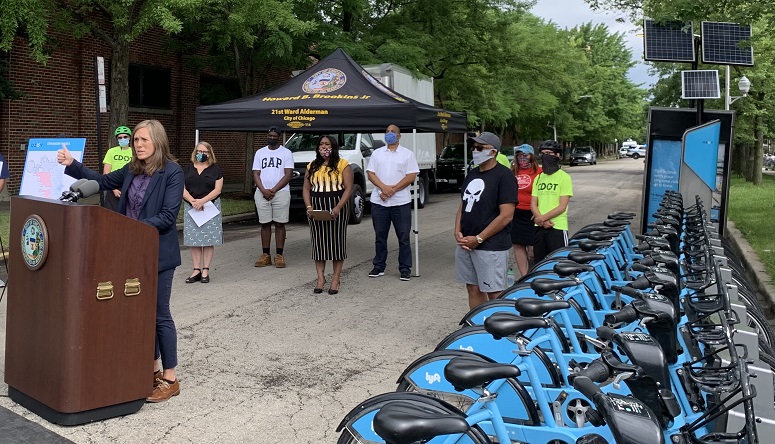 At left, Gia Biagi, Commissioner for the Chicago Department of Transportation.

The expansion aims to make cycling more accessible in a traditionally underserved and disinvested neighborhood.

Biking has surged across the country as the coronavirus pandemic continues to rage. However, for residents of Chicago’s Far South Side, bike infrastructure, including bike share, has been scarce. That is beginning to change with the expansion of Divvy bike share stations by almost 60 square miles, into areas of the city that previously featured few or none.

Transit advocates praise the expansion, stating that it has the potential to bring transformative change to a part of the city that has been traditionally underserved and disinvested.

“Paired with reduced pricing, this is an exciting step towards making Divvy a transportation option for all Chicagoans,” said Amy Rynell, executive director of the Active Transportation Alliance, in a July 16 press release. “For too long, Far South Side residents have been cut off from the rest of the city with limited transit and bike access. We applaud local activists and city leaders for making this expansion possible.”

The expansion area represents the first phase of a program designed to locate Divvy stations in every Chicago neighborhood by 2021. When the expansion is complete, there will be 16,500 bicycles, including e-bicycles, which have built-in cable locks. There will also be 66 new stations, bringing the total to 800. The expansion is being executed in collaboration with rideshare provider Lyft, which sponsors and operates the Divvy system.

Lyft is making a $50 million investment in bicycles, stations and related hardware for the expansion. Lyft also plans to make an additional $77 million in investments for new bike lanes on the South and West sides of the city over the upcoming nine years. Lyft also awarded 15 grants totaling $100,000 to community groups to increase bike share use in low- to moderate-income communities. In 2019, Divvy launched a Bike Mechanic Boot camp to train young people in Chicago to perform bike repairs, and enable them to apply for positions with Divvy.

When Divvy launched in 2013, its original 300 stations were concentrated in and around Chicago Transit Authority rail stations — a system that has historically underserved the city’s Black communities. Since then, the Divvy system has undergone two expansions and now covers a service area of more than 100 square miles, making it the largest bike share system in North America. However, many stations are still located in or near transit stops.

This transit-focused approach, while ideal for downtown and the city’s North Side, is problematic for the South Side, which is less densely populated and has fewer transit stations. The strategy was also a misfit for the logistics and culture of the South Side, according to Oboi Reed, president and CEO of Equiticity in Chicago.

“Bike sharing in this country follows a European model. The European model for bike share is a model of bikes as a form of transportation targeting commuters,” Reed said. “Well, who are the commuters that are willing to ride their bike in Chicago? They’re largely white, middle to upper income. They live on the North Side and they live downtown.

“I would like to see somebody go into Englewood and convince some Black person in that community that they should be riding their bike as a commuter to go to work. You know, you’re going to get laughed out the neighborhood.”

As a result of input from more than 15,000 residents who participated in more than 150 events across the city, with 75 events located on the Far South Side, stations within the expansion area are also located near parks and bike paths, in addition to transit stations. Providing bike share as a resource for health and recreation is more in line with the desires and needs of the South Side, according to Reed.

Along with conventional bicycles, the Divvy expansion will eventually include 10,500 new e-bikes, which feature pedal-assist technology. E-bikes can be parked at Divvy stations and at public bike racks using a built-in cable lock. E-bikes can be especially advantageous for promoting biking on the Far South Side, according to Reed.

“I was anti-e-bike for many years until I rode one for the first time. Since then I’ve been a proponent of using e-bikes as a way to entice or interest people who traditionally were not interested in regular Divvy bikes,” Reed said. “Our neighborhoods are less dense, more spread out. And we experience a number of food deserts in our neighborhoods. Having an e-bike does make it a little bit easier to move through our communities to a destination that’s a little further away and not be physically taxed, the way you would be on a regular bike.

“The other example is when people use bikes as a form of transportation, some out of necessity, very poor people who are not able to afford a car or not able to afford transit. And the bike is the only vehicle of transportation. Well, that bike now gets you to where the job is. If your job is a few blocks away, or a few miles away, you now have a vehicle to get you there,” Reed said.

While the expansion of Divvy stations into the Far South Side is beneficial, simply locating new stations is not sufficient, according to Reed.