Applications for a state solar tax credit have exceeded a legislatively imposed cap on awards every year since 2013, and the waitlist is growing longer in recent years.

Today, the commercial real estate developer is still waiting for a promised state solar tax credit, hoping it will come through on his 2020 taxes.

Muller is among a growing list of Iowa solar customers and investors who are waiting longer to receive the state’s popular solar tax credit. Applications have exceeded a legislatively imposed cap on awards every year since 2013, resulting in a growing waitlist of applicants being rolled over into the following year.

A bill (HF 221) introduced late last week aims to solve the backlog by doubling the current annual award cap to $10 million. It would also set the value of the tax credit at 15% of a project’s cost, decoupling it from the shrinking federal solar tax credit, and sunset the incentive in 2030.

“That is at the top of our agenda during the session,” said Lewis Butler, a member of the board of directors of the Iowa Solar Energy Trade Association and the sales director at Simpleray, a solar installer.

While the solar tax credit has received bipartisan support in the past, the proposal will need to jockey for position among several other priorities including broadband expansion, education, and mental health services. A similar bill in 2016 to lift the cap to $7.5 million failed to pass the Legislature.

State Sen. Joe Bolkcom, an Iowa City Democrat who introduced that bill and the original legislation in 2011, said he hopes that Republicans who dominate state government will see the value in expanding the credit, which has supported hundreds of jobs, according to industry estimates.

“If we had our act together here in Iowa,” Bolkcom said, “we’d boost this from $5 million to $50 million because of the return on investment. If you were Warren Buffett, that’s what you would do.”

Between 2012 and 2020, the state awarded about $36.6 million in solar tax credits, and beneficiaries spent about $291 million on solar arrays — about $7 invested for every dollar in tax credits.

“It’s been an extraordinarily successful investment of state tax credit money,” Bolkcom said, pointing out that about 30 state tax credits siphon off some $400 million in state funds each year. “I gotta say this credit has probably outperformed every other tax credit on the books in Iowa. It has created jobs in all 99 counties. If people want to improve things in rural America, this is a terrific way to do it. This works wherever the sun shines.” 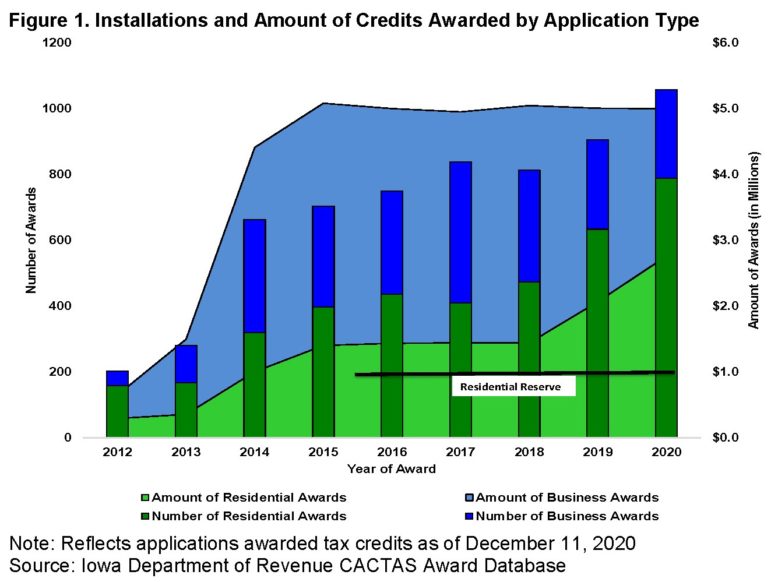 A graph from the Iowa Department of Revenue’s Solar Energy System Tax Credit Annual Report for 2020 illustrates the state’s solar installations and credits from 2012 to 2020.

The ever-growing delay in issuance of the credits, along with uncertainty about their value going forward, “is a nightmare” for solar companies and customers, said Raki Giannakouros, who owns Blue Sky Solar in Dubuque. The Iowa credit is defined as half of the federal solar tax credit. The federal credit began at 30% in 2006, then stepped down to 26% and was set to fall to 22% as of Jan. 1 before Congress voted to maintain it at 26% for two more years.

The Iowa Department of Revenue has been processing credits based on the scheduled 22% federal tax credit rate, according to the solar industry. The industry wants the state to resume issuing credits for 13% of the total cost of installations.

“There’s uncertainty about whether it steps down or doesn’t,” Giannakouros said.

The state’s revenue department could not be reached for comment.

Regardless of the percentage, the state credit is capped at $5,000 for homeowners and $20,000 for business owners who install solar panels.

Given the current ambiguity, Giannakouros said he and his staff make it a point to be “very transparent. We are not promising people something they won’t get. We tell them upfront: ‘Here’s what we know right now.’”

Matt Edwards, comptroller for CB Solar in Des Moines, said many customers are already nervous about solar investments, and when a tax credit turns iffy, “it’s a deal-breaker.” He tries to compensate for that by shifting the focus to the federal tax credit, since “it’s unlimited and does not have caps.”

The uncertainty and the long wait have had minimal impact on large commercial projects, probably because they qualify for other subsidies such as depreciation and federal grants, Giannakouros said. But he guesses that residential projects, a smaller proportion of his business, have fallen by at least half as a result of the tax credit uncertainty.

“Last year was when things got really nutty. We have to do a lot of explaining: ‘We’re going to put this [credit] in your quote, but it’s not guaranteed. This is your potential state tax credit.’

“All those things have made it a bigger challenge.”

One strategy lies to the east across the Mississippi River.

Meantime, the waiting list for the credit continues to grow. Butler, of the state’s solar industry association, said it’s estimated that by late this year the waiting list will reach $8 or $9 million worth of projects.

Muller, the real-estate developer, said operating without the $11,000 he’s been promised “is going to change things for me. It’s money I can’t reinvest in the community. I have other solar projects in mind, but I won’t do those with this possible problem.”