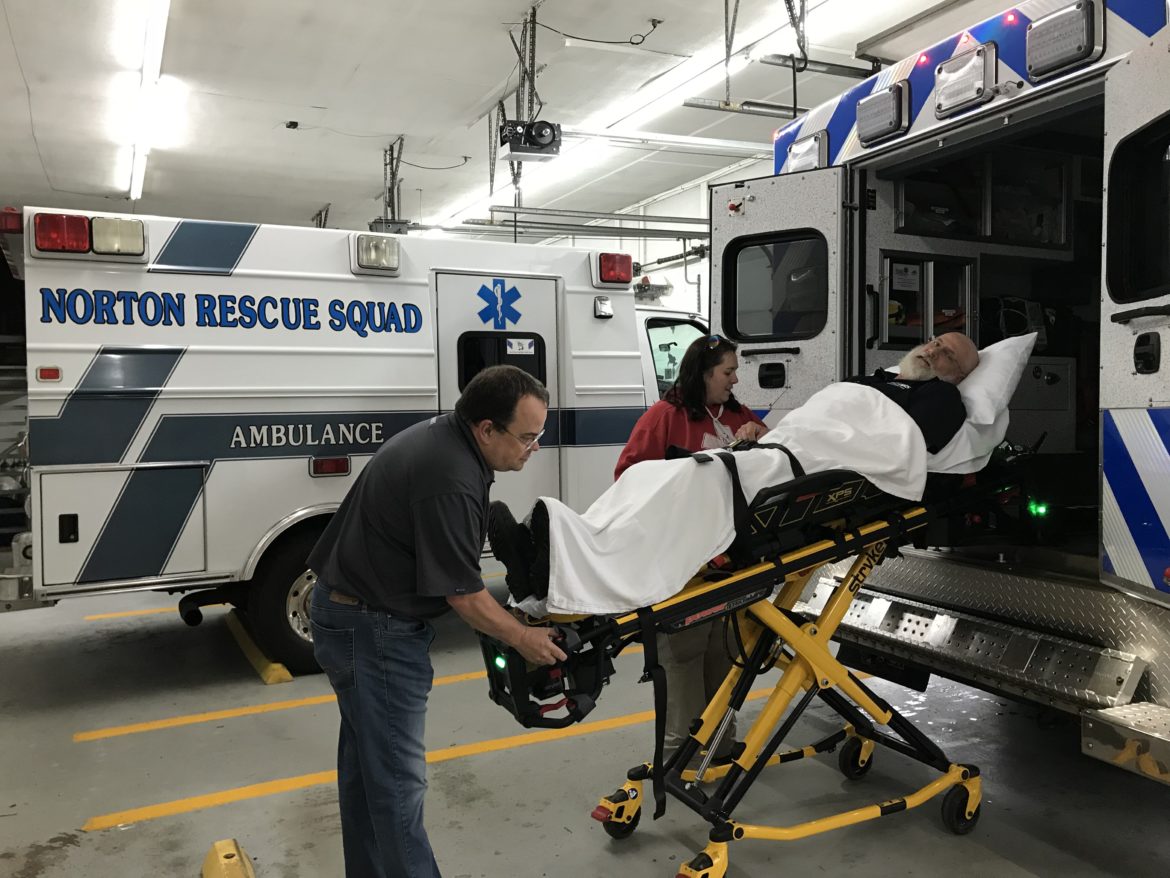 In this 2019 photo, members of the Norton Rescue Squad, including squad leader Todd Lagow, left, and Skipper Dorton, right, practice loading a patient into an ambulance using its lift system.

A solar workgroup is retooling its approach and hopeful that Virginia’s new clean energy law will help overcome obstacles.

But it became a way-back-burner issue when the COVID-19 outbreak surfaced, leaving him scrambling for enough quality masks and other personal protection equipment for the 55 volunteer first responders and firefighters he supervises — plus the patients they serve deep in Appalachian coal country.

For decades, solar has been a tough proposition in this underserved, poorer part of Virginia. Perhaps nobody knows that better than the Solar Workgroup of Southwest Virginia, the original champion of Lagow’s renewable energy ambitions. Thus far, the collaborative’s attempts to install more than 4 MW of solar in the region have been stonewalled.

However, workgroup members are optimistic that renewable energy policy emerging from this year’s General Assembly combined with a call for new industry partnerships will refresh possibilities for commercial-scale solar projects across their seven-county region.

The Norton rescue squad project was one of 12 projects totaling 2.73 MW the workgroup sought bids on a year ago. Initially, Lagow had designs on coordinating a power purchase agreement to fund the upfront costs of his building’s solar array. With that possibility kaput, he’s intent on seeking funds independently.

“I’ve got lots of things on my plate, but if I could find money for solar I’d pursue it,” said the 50-year-old, who also serves as fire chief. “Unlike an equipment grant that’s spent and gone, a grant for solar is one that keeps on giving.

“Even if we get pushback about solar around here, if I could find one that covered 100% of the costs, I don’t see how I could turn it down.”

In early April, the solar workgroup issued its newest tactic. It invites co-developers to figure out how to identify, design and develop cost-effective commercial-scale solar and battery storage projects. Responses are due by May 11.

Adam Wells spearheaded the workgroup. He acknowledged that this modified approach — a request for information — is an attempt to overcome the barriers that developers who won prior bids encountered with pre-selected projects.

“This has been a learning curve for us,” said Wells, regional director of community and economic development for Appalachian Voices. “We’ve experienced failure and this request for information is the continuation of an experiment.

“We have made our solar intentions known. The work group is now a trusted authority on solar in the region. Now we’re leveraging that trust.”

The collaborative, birthed in 2016 at a University of Virginia-Wise forum, wants to turn solar into an economic catalyst in the coalfield counties of Buchanan, Dickenson, Lee, Russell, Scott, Tazewell and Wise and the city of Norton. Norton, a city of 3,900, is in Wise County.

Early on, the workgroup received federal funding from the Appalachian Regional Commission and the Department of Energy’s SunShot Initiative.

Another national initiative, SolSmart, can be a launchpad for renewable energy ideas, Wells said. Last summer, that program recognized eight communities in Central Appalachia for acting to reduce the time and expense required to install solar energy systems.

Workgroup members drew on their deep expertise and advice from the industry sector before rolling out the request for information.

One participant at that table was NCI, a solar developer in Richmond. The company had paired with Acorn Electrical Specialists in Piney Flats, Tennessee, and RockBridge Energy in Savannah, Georgia, to win the workgroup’s first bid for 1.5 MW of solar in November 2018.

“This isn’t just a shot in the dark,” Wells said. “From the feedback we get, we hope to develop a request for proposals for co-development so we can understand what is possible.

“We want developers to tell us, without mincing words, how to make this work.”

‘Great opportunity … laid at our feet’

For months after being awarded the bid, Daniel Hunnicutt of RockBridge Energy tried every possible angle to forge ahead on the six projects included in the 1.5 MW package. He and his team members immersed themselves in Virginia rules and regulations, seeking workable financing packages.

Hunnicutt considered the two high schools in the bid — a total of 1,200 kW on Ridgewood High School in Dickenson County and Central High School in Wise County — to be the anchor projects. The other four projects, all in Wise County, included Norton Green Apartments, the Lonesome Pine Industrial Center, the University of Virginia-Wise Oxbow Center and the Wetlands Estonoa Learning Center.

Each had its own tangled set of obstacles.

“We have to create a path forward that doesn’t look like anything we’ve used before,” Hunnicutt told the Energy News Network when he was in the thick of his research. “We’re committed to moving forward, but it’s never easy when you’re covering new ground and have to find another way around.”

The workgroup’s second round of a dozen proposed solar projects announced in April 2019, which included the Norton rescue squad building, proved to be equally complicated. That list of nonprofits, businesses and local government entities included a Baptist church in Gate City, a fitness center in Big Stone Gap, an apartment complex in Abingdon, a wastewater treatment facility in Pennington Gap, a hotel in St. Paul and a hospital building in Norton.

At the time, Chelsea Barnes, the new economy manager for Appalachian Voices, knew deploying solar would be tricky in a state with piecemeal legislation, and in a region where utilities weren’t up to speed on renewables and transitioning away from coal was eyed warily.

For instance, nine of the 12 proposed projects were in the footprint of Old Dominion Power, an investor-owned utility with a tiny solar footprint. It’s a unit of Kentucky Utilities that serves about 30,000 Virginia customers in Wise, Lee, Russell, Scott and Dickenson counties.

Now, however, Barnes is encouraged by legislative boosts to net metering and power purchase agreements and checks on standby demand charges cemented when Democratic Gov. Ralph Northam signed the Virginia Clean Economy Act and the Solar Freedom bill into law. Both take effect on July 1.

Barnes predicts those measures could lead to progress on many, but not all, of the proposed workgroup solar projects. For instance, the Ridgeview High School project is caught in limbo because of utility contract negotiations.

She also sees the request for information as a tool for expanding the solar conversation.

“We’ve learned a lot,” Barnes said. “We’re trying to take a step back and say that we need to work with somebody who has experience in financing.

“We need innovative partners who can see the landscape, recognize what is possible and say, ‘This is challenging but these are the creative solutions we can use.’”

She is hugely encouraged by a Clean Economy Act provision that requires Dominion Energy, Virginia’s largest utility, to procure 200 MW of solar or wind on brownfields, coal-mined lands and other previously developed sites by 2035.

While the General Assembly laid out a “big runway for solar,” Barnes knows Appalachia is still hemmed in by geography, a shortage of financial wealth and a lack of local solar developers. The closest one is three hours away.

Barnes, who is based in Norton, also noted that it’s heartbreaking for an enormous health threat in the form of the coronavirus erupted on the heels of the legislature’s monumental progress.

“All of this great opportunity was laid at our feet at the same time we’re in an economic crisis,” she said. “We’re hoping we can soon be in a place to say, ‘There is all this opportunity here. Let’s make the most of it.’”

A region left behind on multiple fronts

Wells, her colleague, said the workgroup persists with solar because southwest Virginia deserves to partake of the fastest-growing energy source in the country.

“This region is worthy of investment for the jobs created and the money saved,” he said. “If we don’t do what we’re doing well, that economic growth will go elsewhere.”

As K-12 students become familiar with solar possibilities, they view renewable energy as a career option. Solar, he emphasized, is one thread in the web of solutions that expands the job market.

For Lagow, solar is a money-saver that could almost erase the $800 to $1,000 monthly electric bill at the city-owned rescue squad headquarters.

The ability to free up dollars for cots, suction units and other medical supplies motivates him to serve as a solar ambassador among his fellow professionals. If he successfully adds arrays, he figures Norton can be a renewable energy model for similar buildings in the region.

Lagow wants to put grant-hunting closer to the top of his lengthy to-do list. But with COVID-19 putting everyone on edge, he is primarily devoted to ensuring that three ambulances are prepared to serve any of 8,000 residents spread across 45 square miles.

Relief came recently with the arrival of enough personal protective equipment, or PPE, from the Strategic National Stockpile to cover his volunteers and the 20 law enforcement officers connected to the Norton operation.

Still, it’s frustrating to live in a region that is an afterthought on so many fronts.

“Southwest Virginia is often left out,” Lagow said. “We feel that way a lot.”