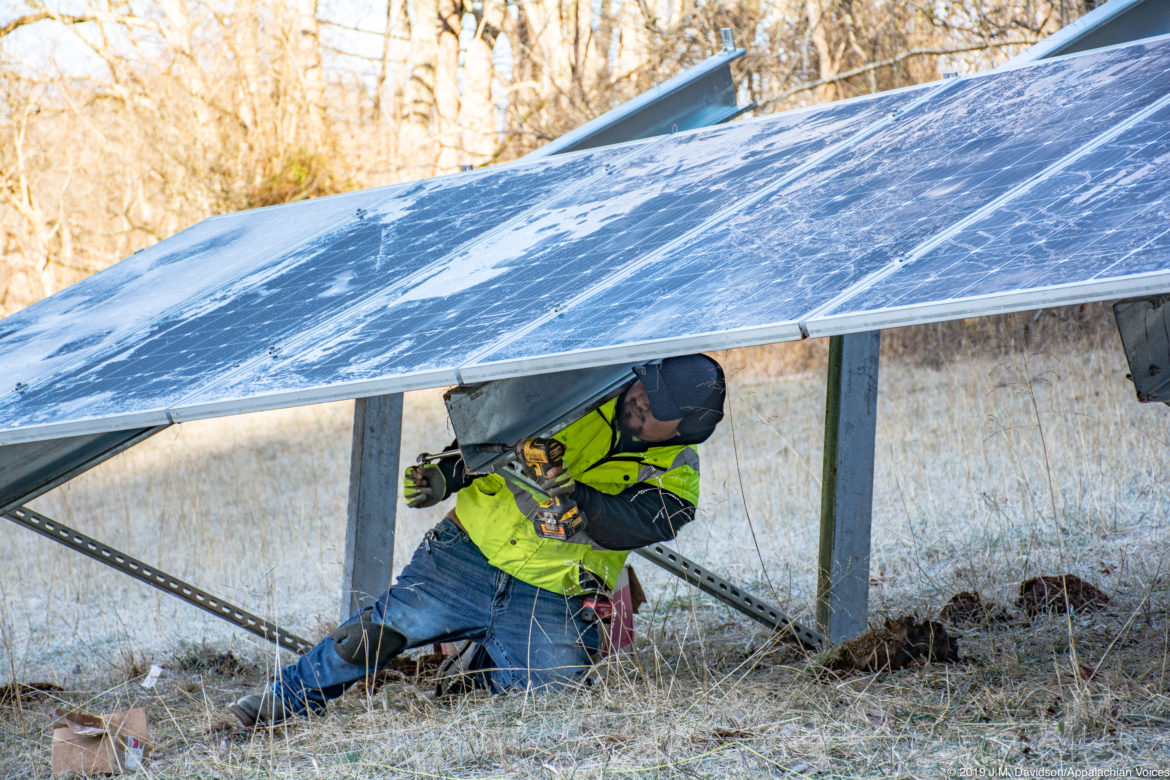 They have realized that if they don’t offer lessons in civics, math and science to local decision-makers, their region will remain an afterthought in the state’s much-ballyhooed energy transition. Fears that solar arrays could be out of their financial reach spurred Wise and Tazewell counties to act.

In theory, the state General Assembly granted such access this year when legislators passed the Virginia Clean Economy Act and the Solar Freedom Act.

Not only do the new laws open power purchase agreements in Appalachian Power territory to both private, or jurisdictional, and public, or non-jurisdictional, customers, but they also boost the financing limit from a restrictive 7 megawatts to 40 MW. As well, they bump up net metering allowances significantly.

In practice, however, executing such expansions for public entities could be tricky. It all depends on the wording of the contract. It’s privately negotiated and its content supersedes state code.

For instance, a rider in the 2016 pact — which expired in June, but is in effect until a new one is signed — caps territory-wide, net-metered solar systems at a puny 3 MW for schools and other government entities. That limit was maxed out by 2019.

In tandem with the cap on net metering, the current contract is nebulous about power purchase agreements, saying public ratepayers must own and operate the solar array.

“We’re not on the cusp of starting a solar project, but we want to reserve the right to do a power purchase agreement,” said Chris Stacy, superintendent of the 5,300-student Tazewell County Public Schools. “The way it is now, doing it on our own isn’t fiscally viable. We would need a partner.”

Several years ago, a preliminary assessment estimated that Stacy’s district could save $2.7 million annually over 25 years with 2.5 megawatts of solar. His yearly budget is $60 million.

He supported his school board’s decision to pass a resolution at the behest of Appalachian Voices, a driving force behind including southwest Virginia in the state’s solar surge. The nonprofit advocacy group has joined with Solar United Neighbors, Generation 180 and others to educate area localities about why their input matters during the current negotiations.

“A lot of schools and local governments don’t realize these barriers to solar exist or how to change them,” said Chelsea Barnes, new economy program manager at Appalachian Voices.

Plus, she said, it’s difficult for government leaders to focus on a utility contract when they are distracted by a coronavirus pandemic and a recession that is forcing them to redo their budgets.

“It’s complicated because governments don’t understand the process of solar. Power purchase agreements and net metering are very foreign to people,” Barnes said. “People care about solar energy, the environment and saving money on their electric bills. We have to help them understand what they need from the contract to meet those goals.”

Briefly, net metering allows customers to offset their electric bills by sending energy generated by their solar panels back to the grid.

Power purchase agreements allow a third party to own, operate and maintain solar arrays on behalf of a customer. They are especially crucial for tax-exempt and public entities that don’t have the upfront capital to invest in solar arrays or the ability to claim tax credits that make the projects more financially viable. Those customers usually pay a reduced price for electricity because the third party benefits financially from renewable energy tax credits.

Federal tax credits are scheduled to taper off gradually, and then more drastically, over the next several years.

The coalition’s efforts have also spurred letters calling for equal access to solar from the town of Blacksburg, the school board in Carroll County and leaders in Pulaski County, Barnes said.

C. James Ervin, Rocky Mount town manager, is leading the steering committee in the newest round of negotiations to ensure that Appalachian Power charges localities “rates that are fair, just and reasonable.” Its most recent virtual meeting was Oct. 14.

Rocky Mount, a Franklin County town of about 4,700, is about 25 miles south of Roanoke in the Blue Ridge Mountains.

The latest four-year contract signed with Appalachian Power expired at the end of June. The Virginia Municipal League and the Virginia Association of Counties created the steering committee in 1978 to represent localities in contract negotiations with the utility.

Ervin said he can’t yet comment on when a new contract will begin, how long it will last or its specifics.

“We have answers to all of those,” Ervin said in an interview. “But since it’s an ongoing chat, it’s best to keep it between the contract parties.”

Ervin noted that an agreement and an announcement hinge on the base rate case now before the State Corporation Commission for non-government customers. The steering committee can piggyback off that case as presented to utility regulators.

He also said he felt more confident than he did in April about Appalachian Power budging on caps on both power purchase agreements and net metering. The key, he added, is building a solid foundation that allows for flexibility.

“Appalachian Power has signaled it will comply with the Virginia Clean Economy Act,” Ervin said. “Our intent is to fold that in. We’re trying to dot the i’s and cross the t’s.

“Now it’s gotten to where it’s somewhat economically fashionable to go down this road,” he said about how renewable energy and the tools to expand it are blending “in the perfect harmony of fiscal conservatism and environmental stewardship. They’re colliding in a happy outcome.”

The utility is “awaiting a response,” she said. “We are optimistic that an agreement can be reached that will meet the needs of our customers and our company.”

As part of the contract negotiations, Appalachian Power completed a cost-of-service study for its public authority customers at the end of last year. The technical study offers an analysis of how much it costs the utility to provide electricity to different customer groups. It doesn’t necessarily determine rates, but provides relevant discussion fodder for the steering committee.

The utility has implied that raising the cap will lead to increases in kilowatt-hour costs because of expenditures to adjust and build infrastructure to accommodate more renewables.

In a recent newspaper opinion piece, Sen. John Edwards, D-Roanoke, said that the General Assembly expanded the power purchase agreement program with the specific intent that it be available for tax-exempt entities.

As the distribution of solar energy by non-monopolistic private entities grows in Virginia, he said, local governments and schools should be able to benefit from less expensive solar energy and save taxpayer dollars on electric bills.

“The … Steering Committee should negotiate new contracts …. to reflect the changes in the new state law and allow an increase in the net metering cap and access to PPA financing so our local governments can take full advantage of the benefits and lower costs of renewable energy,” Edwards wrote in the Roanoke Times.

Appalachian Voices spearheaded the Solar Workgroup of Southwest Virginia five-plus years ago to try to smash what seemed intractable barriers to solar power in this mountainous region. While the workgroup is on the verge of multiple rooftop solar advances via a deal announced in September, Barnes is not about to set aside her advocacy hammer.

“This is not something that will resolve itself,” she said about the workgroup’s diligence on all fronts. “It’s frustrating, but not surprising, that we are working with utilities that aren’t very forward-thinking.”

Barnes, who lives in Norton, a city in Wise County, doesn’t want the job-starved region to miss out on the bounty of employment opportunities the solar industry can provide. Nor does she want residents to be stuck in a bygone era where too much of their paycheck goes toward a burdensome electric bill.

“Issues of energy inequity are embedded in policies, regulatory regimes and the way we do business,” she said. “You can’t just write a law that fixes all of that. These are complicated issues that require persistence and constant attention.”

As it stands now, just 22 kW of the nearly 21,000 kW of solar installed at K-12 schools across Virginia is in Appalachian Power territory. That’s one-tenth of 1% of the total, according to research conducted by Generation 180 through December.

Stacy, named school superintendent of Tazewell County last year, is eager to have a crack at Virginia’s solar revolution. As a teacher and principal in the same district for two dozen years, he has watched Tazewell’s 15 school buildings age.

He wants options when the replacement of those facilities begins.

“Some people think that as soon as this [COVID-19] crisis is over, we’ll get back to normal,” Stacy said. “The news is that online learning is here to stay.

“It’s the same thing with solar energy. It’s evolving. And it’s one of the avenues we need to be able to explore.”