The competition provides networking and hands-on experience for “the next generation of the wind energy workforce.”

The 21-member team earned first-place honors at this year’s U.S. Department of Energy Collegiate Wind Competition despite having to pivot to a virtual format in March when the coronavirus put the Harrisonburg, Virginia, campus on lockdown.

Jonathan Miles, who directs the university’s Center for the Advancement of Sustainable Energy, was beaming Monday when the Energy Department announced the results during an online awards ceremony for all 12 participating colleges.

“I really have to hand it to them,” said Miles, team adviser and professor of integrated science and technology. “It was kind of a balancing act right up until the end. They pulled through and I give them all the credit.”

Virginia Polytechnic Institute and State University in Blacksburg was the other Virginia participant in the contest.

The location of the competition rotates in tandem with the American Wind Energy Association’s annual conference. This year, it was set for Denver during the first week in June — until COVID-19 intervened.

Instead of traveling to Colorado, students presented their work via a series of four webinars. They replaced posters with digital slides and showed their turbine designs and project development plans from their homes. Industry experts served as judges.

All teams were tasked with designing a turbine to withstand continuous winds of 22-25 meters per second and to research and develop a plan for a hypothetical 100-megawatt wind plant in eastern Colorado.

This year’s unusual circumstances prompted officials with DOE and the National Renewable Energy Laboratory to issue two top awards instead of one for an overall champion. Final rankings and detailed results will be posted to DOE’s website later.

James Madison won in the “project development” category. In addition to a site analysis, that soup-to-nuts segment required students to delve into details about design, cost, tax credits, the history and culture of the region and how much energy their wind farm could generate. 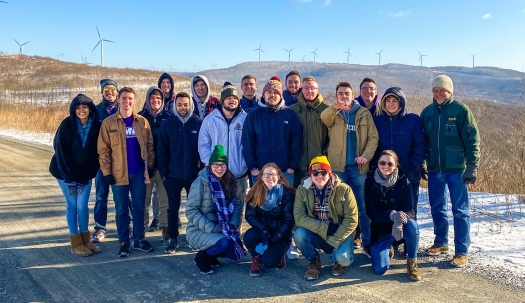 Since the contest debuted in 2014, DOE organizers have regularly tweaked the parameters to keep it fresh. This year, they had to redraw some of the boundaries because it was impossible for student teams to fabricate a physical turbine, undergo an actual wind tunnel test or conduct an on-the-ground timed siting evaluation.

Daniel Simmons, assistant secretary for DOE’s Office of Energy Efficiency and Renewable Energy, called the competition “particularly memorable” because of the abrupt transition.

“I am inspired by the flexibility, resilience and dedication of this year’s competitors,” Simmons said. “These talented students are the next generation of the wind energy workforce.”

The wind competition is modeled after the Solar Decathlon, an ambitious DOE undertaking launched in 2002 to encourage ingenuity in the field of renewables among college students.

This is the fourth time James Madison had been invited to compete. Miles prides himself on fielding an academically diverse team that reaches beyond the usual majors — engineering and computer science.

“We need them, but not only them,” Miles said. “We’re looking for students who are passionate about the wind industry and will work hard in the competition.”

He and his two fellow advisers also recruited a mix of undergraduates majoring in theater, physics, management, industrial design, geographic science and integrated science and technology.

Miles, who arrived on campus 24 years ago, advised his first wind energy student during the 1998-99 academic year. Since then, his graduates have started companies and filled renewable energy jobs nationwide.

As Virginia’s nascent offshore and onshore wind industry begins to flourish, more of his graduates will likely be able to work closer to home.

That’s the case for Jamie Mears of Glen Allen who will be based in Charlottesville when she joins Ørsted next month as a project developer focusing on onshore wind in the eastern United States.

Ørsted, a Danish wind giant, has partnered with Dominion Energy to build the first two offshore wind turbines in federal waters. That pilot project, 27 miles off the coast of Virginia Beach, is set to go online this autumn.

“She has some leadership chops and it was great to have her perspective,” Miles said about the integrated science and technology major who joined the university’s wind team as a sophomore. “Her new job is a huge success and I couldn’t be happier.”

Miles laments that team members missed out on abundant networking opportunities this year.

“For students, this is their very first experience with a professional, technical conference,” he said. “It’s especially difficult for the seniors, who lost out on a lot of things this spring. One was the opportunity to go to Denver and present live.”

Miles is elated that DOE leaders have invited this year’s crop of competitors to attend a reception at next year’s competition scheduled for Indianapolis.

Historically, the contest has been an every-other-year event. However, in late February, the federal agency announced that it has selected 13 colleges to compete in 2021. Both James Madison and Virginia Tech are on the list.

This year, one James Madison team member did indeed make it to Colorado — in person. Colton Sorrells, who just earned a bachelor’s degree in integrated science and technology, left his Centreville home last week to drive to Boulder.

Monday was his first day on the job as a wind project developer with Scout Energy.

“He ended his first work day by watching the ceremony virtually,” Miles said about Sorrells. “It was quite a day for him.”