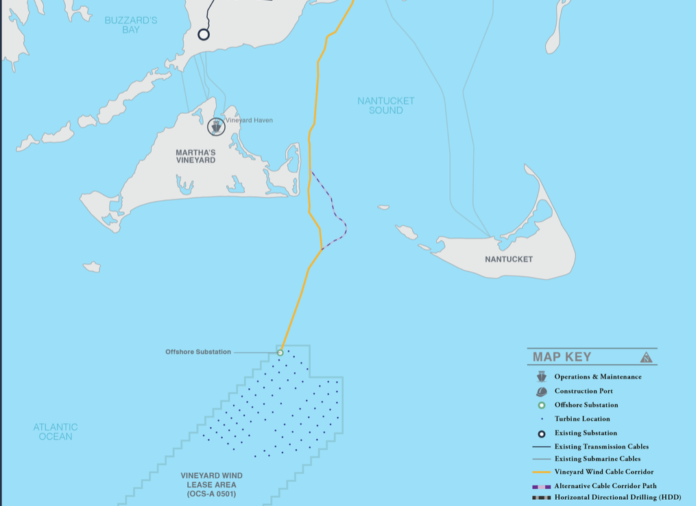 RENEW Northeast also says it has joined with the Massachusetts Business Roundtable, WindSTAR Center at UMass Lowell and the National Wildlife Federation to express appreciation to BOEM for releasing its Supplement to the Draft Environmental Impact Statement for the Vineyard Wind 1 Offshore Wind Energy Project and to urge decisive action that will allow the offshore wind industry to move forward.

The group is making a public call to action to other organizations, businesses and institutions to express their support to BOEM either through public comments at the hearings or by submitting written testimony. The last public hearing is July 9, at 5 p.m. and the deadline for written comments is July 27.

Vineyard Wind 1, located in federal waters off the coast of Massachusetts, will be the first large-scale offshore wind project in the U.S. providing 800 MW of clean and reliable electricity into the New England power grid.  RENEW, together with Massachusetts Business Roundtable, WindSTAR Center at UMass Lowell and the National Wildlife Federation will be filing formal comments. The organizations will highlight offshore wind’s dual economic and environmental benefits to the region and the need to accept the 1×1 nautical mile transit lanes endorsed by the U.S. Coast Guard.

At sites located on the Outer Continental Shelf, the Department of Energy estimates offshore wind’s technical potential at over 2,000 GW (or double the amount of all existing installed U.S. electricity), 86 GW of which could be developed by 2050. Atlantic coastal states, recognizing the economic and environmental opportunities afforded by the technology, have collectively issued procurement targets for 29 GW of offshore wind. A recent economic development study from the American Wind Energy Association reported that offshore wind development off the Atlantic Coast could translate into $57 billion in direct investment, add $25 billion in annual economic output and create 83,000 well-paying jobs by 2030, all while stabilizing retail electricity rates and emitting no climate-altering greenhouse gases.

“We were proud to reach agreement with Vineyard Wind on measures to protect the endangered North Atlantic right whale during project construction and operation. It is time to harness this critical climate solution while protecting wildlife every step of the way,” she adds.

BOEM has now completed four of its five scheduled virtual meetings. The vast majority of commenters have expressed strong support for the Vineyard Wind project and the responsible development of offshore wind. Support has come from diverse stakeholders, including residents of Martha’s Vineyard, elected officials, labor union representatives, business owners, investors, commercial fishermen, climate activists, scientists and students. Commenters cite the urgency to stem climate change and harness economic benefits as among the reasons they approve of offshore wind development.

One of the pivotal outstanding items being reviewed by BOEM is that of transit lanes. RENEW Northeast, the Massachusetts Business Roundtable, WindSTAR Center at UMass Lowell and The National Wildlife Federation support the uniform 1×1 nautical mile layout that the U.S. Coast Guard determined, after a robust public input process, would “maximize safe navigation.” The 1×1 nautical mile layout, agreed to by all New England offshore wind leaseholders to provide ample and uniform navigation transit lanes, is larger spacing than in any other wind facility currently operating in the world.

An alternative layout requiring additional transit lanes over four times wider than the U.S. Coast Guard reviewed 1×1 design is under consideration by BOEM and has been widely criticized in public comments received during the four meetings.

RENEW Northeast, the Massachusetts Business Roundtable, WindSTAR Center at UMass Lowell and The National Wildlife Federation encourage members of the public to share their comments about the urgent climate and economic need for offshore wind and support the 1 x 1 nautical mile navigation lanes. BOEM is accepting comments during one additional public meeting, online and by mail through July 27.