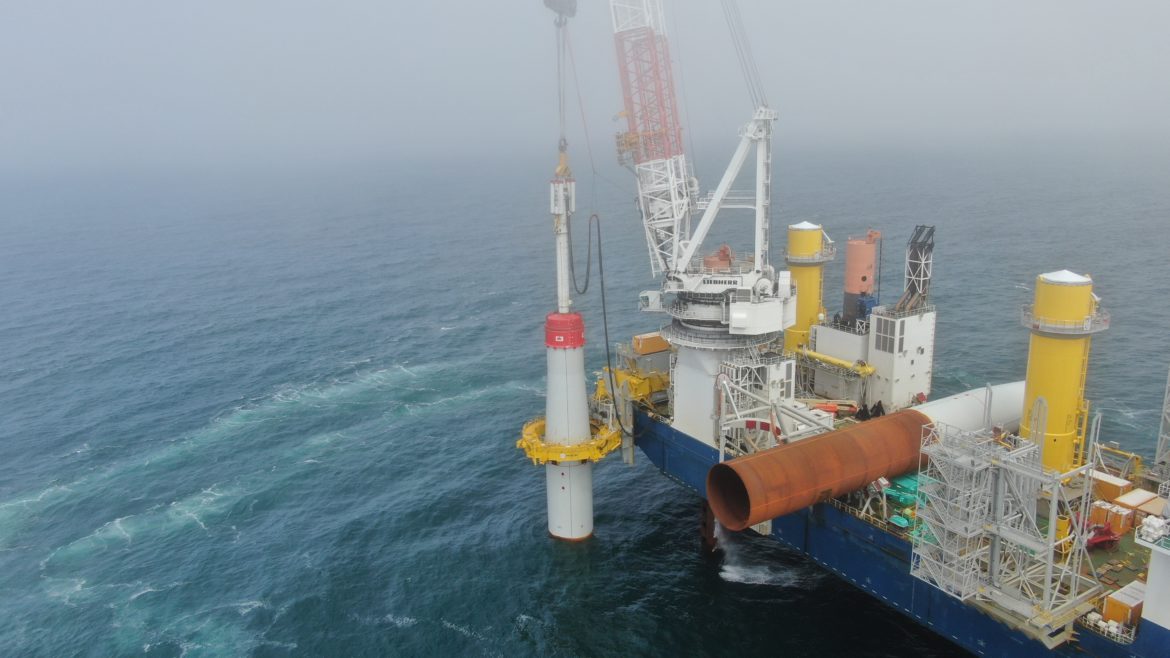 Projects give Virginia an edge as an industry hub, the utility’s vice president of construction explains in an interview.

It seems only natural that a boy who tinkered with toys and household objects to maximize their performance grew into a Dominion Energy engineer overseeing the utility’s initial offshore wind projects. 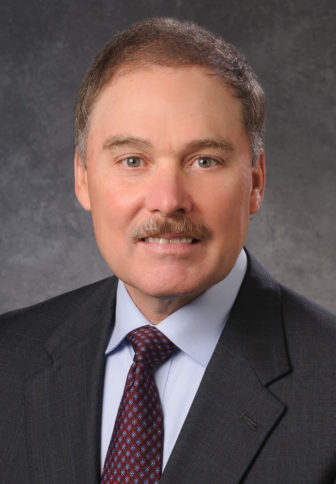 Under his watch, Dominion will begin generating enough electricity this fall to power 3,000 homes from two six-megawatt turbines 27 miles off Virginia Beach. Ørsted, a global leader in the industry, is the developer for what’s called the Coastal Virginia Offshore Wind pilot project. It’s the first U.S. project installed in federal waters, spanning about 2,135 acres.

Within six years, 180 to 190 turbines planned for an adjacent 2,600 megawatt commercial project should produce enough power for 650,000 homes. Survey work is now underway for that phase.

Offshore wind is crucial if Dominion is expected to achieve 100% carbon-free electricity by 2045, as required by the Virginia Clean Economy Act. The law takes effect July 1.

Mitchell, an Ashland native, is a registered professional electrical engineer with a master’s degree in business administration from Wilmington College. He has decades of experience with simple-cycle and combined-cycle natural gas plants, as well as solar and nuclear development.

Dominion’s offshore wind projects have the potential to turn the Hampton Roads region into a supply chain hub, Mitchell said.

“Virginia has major advantages, including a robust maritime workforce and the Port of Virginia in Norfolk,” he said. “There is deep water and no height restrictions entering the port.”

In this Q&A with the Energy News Network, Mitchell discusses his foray into offshore wind. The interview has been edited for length and clarity.

Q: You have been at Dominion for 22 years. When did you start working on offshore wind projects?

A: I actually started out with onshore wind. Beginning in 2004, Dominion partnered with Shell on a project in Grant County, West Virginia, near the Mount Storm Power Station, then with BP on the Fowler Ridge Wind Farm in Benton County, Indiana.

From that experience, it was a natural progression to offshore wind. Dominion saw opportunities starting in 2011 when we got U.S. Department of Energy funding for research activity with offshore wind. By 2013, Dominion had successfully bid on the commercial lease area. That led to a research lease with the Interior Department’s Bureau of Ocean Energy Management and Virginia’s Department of Mines, Minerals and Energy in 2015. Later that year, we entered into an operator agreement with DMME.

Q: When you were growing up in Ashland, what jobs were on your wishlist?

A: That’s an interesting question that I wasn’t expecting. I was probably thinking about playing football and other sports and not even thinking about a career.

I was always taking things apart to figure out how they worked, how they were put together and how they could do something else. Sometimes I got them back together, sometimes not.

At the time, the idea of wind energy or renewables in general just wasn’t mainstream.

Q: First, let’s talk about the pilot project. Do you have an exact completion date yet?

A: It’s progressing very well. The two foundations were installed in late May and we expect the turbines to be installed in the next month or so. We’ll be energizing and testing the two turbines in August and expect them to be operational in a September-October timeframe.

Q: Each blade is 253 feet long. And they’re attached to a hub that juts up to 364 feet above the water. How did these behemoths travel to Virginia?

A: In general, most of the components are manufactured in Europe. They made the transatlantic journey on a cargo ship, the Bigroll Beaufort, which docked in Halifax, Nova Scotia.

There, the foundations were offloaded onto an installation vessel, the Vole-au-vent, and transported to the construction site off the coast of Virginia. That same vessel is now making its second trip from Canada with the turbine components on board. It (was) scheduled to arrive in Virginia late Thursday.

The blades are fragile and large. That’s why we use purpose-built equipment. Everything is loaded and unloaded with a crane, which is on the vessel itself. It has a very stable platform.

Q: And the monopile foundations are underwater, but crucial. What is it like to install those?

A: Conceptually, it’s simple, but practically, it’s a little more difficult. The monopiles are 220 feet long and weigh 1,000 tons apiece. They were fabricated out of steel in Germany by EEW Special Pipe Constructions. Essentially, it’s a large hammer hitting the steel to drive half of the foundation into the ocean bed.

To protect the North American right whale, the window for pile-driving allowed by the National Oceanic and Atmospheric Administration is between May 1 and October 31.

One foundation was installed using what’s called a double-bubble curtain to mitigate noise. We use a compressor to create air bubbles to form a pocket to reduce sound waves in the water and protect marine mammals.

We didn’t use the double-bubble curtain when installing the other foundation. That gave the Bureau of Ocean Energy Management a better understanding of the level of sound protection it provided.

Also, protected-species observers were onsite to notify crews if marine mammals entered the construction zone. None did. 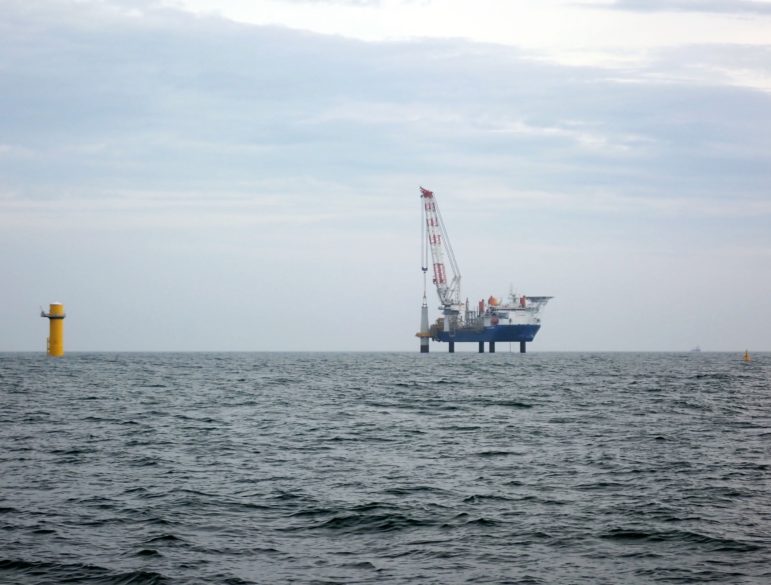 Q: Why is the pilot project worth a $300 million investment, in capital costs, for ratepayers?

A: You can argue with this, but our project is putting offshore wind in the United States where it hadn’t been done before. Yes, there was Block Island (off the coast of Rhode Island), but that project didn’t have to go through the Bureau of Ocean Energy Management.

Yes, it’s two turbines, but everything we learned is extremely valuable for the commercial project, which is estimated to cost $8 billion. It’s certainly worth it to have that knowledge as we prepare for the larger project.

Q: What are the top three lessons you’re hoping the pilot program can teach Dominion?

A: The two turbines for the pilot project are different from the roughly 200 turbines for the commercial one. Still, we’ll be able to leverage all of our experience with permitting, design, installation and operations with the larger project.

For example, the pilot allowed us a front-row seat with the Bureau of Ocean Energy Management permitting process while the standards were being set.

We’ve also learned a lot from installing an undersea cable to connect the turbines to a company substation near Camp Pendleton and developing a contracting strategy.

Dominion does a lot of large capital projects, but we now have a much better understanding of vendors in the offshore wind industry.

Q: Now, on to the commercial project. The lease was executed in 2013 with the Interior Department’s Bureau of Ocean Energy Management and construction is set to start in 2024. What has taken so long?

A: I’m sure people are asking, “What are they doing?” To me, it’s not about complications, it’s just working through things. Back in 2011, offshore wind wasn’t ready to commercialize.

More recently, we have put our focus on the two-turbine pilot project because of what it will teach us.

The commercial project is proceeding at a long, measured pace that is pretty steady. We think it is well thought out. Every single day is a critical day on these projects.

Q: Do you expect to have at least part of a homegrown supply chain by then?

A: Yes, we hope our offshore wind projects, and possibly other projects in North Carolina, Maryland, Delaware and New Jersey, will attract major manufacturing to the Hampton Roads region. Siemens Gamesa is supplying the two 6-megawatt turbines for the pilot project and is our preferred supplier for the commercial project. Hampton Roads is one option as the company seeks a site for a blade manufacturing facility on the East Coast.

Dominion has tapped into the region’s maritime community for support on the Coastal Virginia Offshore Wind project.

For instance, on the pilot project, barges from Cape Henry Launch Service in Virginia Beach have hauled equipment and materials, and Crofton Industries in Portsmouth mobilized a vessel and divers to perform underwater work.

Survey vessels in the commercial area are based out of Colonna’s Shipyard in Norfolk and we’ve engaged fishing vessels out of Rudee Inlet in Virginia Beach as scout boats to help avoid any interactions between fisheries and survey operations.

Q: Wind advocates talk about this industry creating 10,000 to 14,000 jobs in Virginia. Will Dominion be creating any training programs?

A: Partnering with Old Dominion University and Tidewater Community College will provide a very good pipeline of people we can hire. They are already teaching engineering, supply chain management, and ship building and repair to prepare a maritime workforce. All of those skills are needed for offshore wind.

Internally, we look to hire people who have certain backgrounds and train them once they come on board. Dominion has very detailed training programs. We will transfer some of our existing workers into offshore wind.

A: All projects have their challenges. This is harder in a different way. For instance, with Coastal Virginia Offshore Wind, I can’t get in my truck and drive out to the turbines. I have to think about everything ahead of time.

Partnering with Ørsted is helping us learn about constructing these turbines.

Q: The pilot project turbines will be 27 miles offshore. Still, how do you answer people who fear they will be an eyesore?

A: That distance and curvature of the Earth will make it difficult to see them. On clearer days, from high up you might be able to see the tops of those turbines.

The 14-megawatt turbines for the commercial project will be 200 feet taller. A detailed visual assessment will be included in a plan submitted to the Bureau of Ocean Energy Management this year.

Q: What has been your most nerve-racking moment thus far?

A: I sleep good at night, I’ll say that. Lots of things can go wrong with these projects, so you have to have a Plan A, a Plan B and a Plan C. What pops up is the things you didn’t think about.

An example of that is COVID-19. Nobody expected to be quarantined for three months. Everybody took enormous precautions and we kept the project on track. People kept their noses down and worked through it.