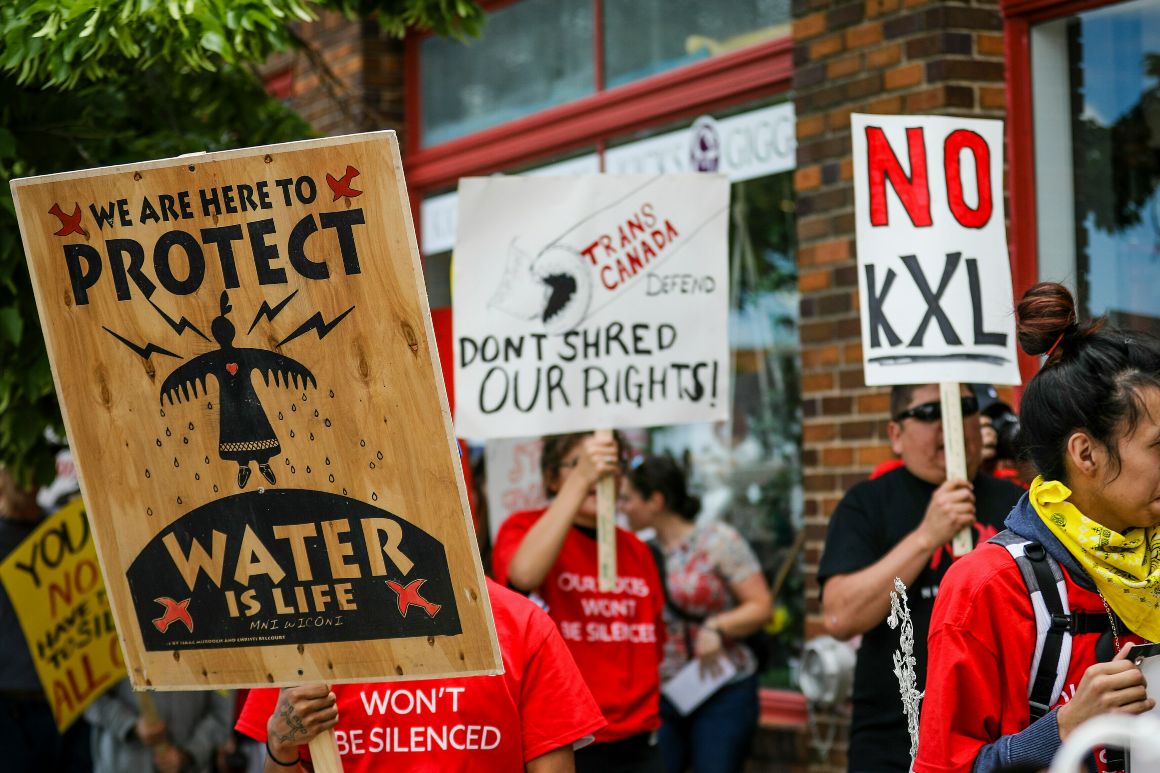 Protesters walk up Main Street in a procession protesting against the Keystone XL pipeline in Rapid City, S.D. on June 12, 2019 | Adam Fondren/Rapid City Journal via AP

Environmentalists are celebrating a string of wins that put the brakes on three major pipelines last week, but oil and gas industry insiders and even some green groups say those setbacks have barely made a dent in the sector’s growing web of infrastructure.

Despite the high-profile courtroom losses by the Keystone XL and Dakota Access oil pipelines and the cancellation of the Atlantic Coast natural gas project, the oil and gas industry has succeeded in putting tens of thousands of miles of new steel in the ground in recent years. And while green groups appear to be winning the public relations battle around some of the biggest projects, the activists may be losing the smaller skirmishes that are locking in fossil fuel infrastructure for years to come, according to industry analysts.

“One thing for sure is there is a lot going on in the pipeline world outside of the public attention on shiny objects like Keystone XL, DAPL or Atlantic Coast,” said John Stoody, vice president of government and public relations at trade group Association of Oil Pipe Lines, pointing to government records showing about 10,000 miles of oil pipelines were built since 2015. “While the many have been focused on debating the Atlantic Coast Pipeline, we’ve actually built and have newly operating over the last five years the mileage equivalent of over 18 Atlantic Coast Pipelines.”

Environmentalists claimed victory after the three projects supported by the Trump administration all stumbled last week. Within the span of 24 hours, a federal court kept work on the long-delayed Keystone XL pipeline frozen, another federal judge ordered Dakota Access to halt oil shipments pending a new environmental review and the utility companies building the Atlantic Coast Pipeline canceled the project after lawsuits from greens and landowners helped push it billions of dollars over budget.

That leaves the Mountain Valley Pipeline, which developers plan to carry natural gas from West Virginia to Virginia, as the last major multistate gas or oil pipeline still moving ahead — and opponents are vowing to fight it as hard as they did the others.

Trump administration officials and some in the gas and oil industry blame green groups for the recent high-profile setbacks. But others are instead chalking up the headwinds to low oil and gas prices and the weak financial condition of many energy companies, as well as inept permitting by the Army Corps of Engineers.

Still, the recent developments have sapped momentum from the industry President Donald Trump has championed since the beginning of his term, and the hits were especially hard coming against two pipelines that Trump had issued orders to approve — and which he had repeatedly cited at rallies and speeches as major accomplishments of his administration.

“I just approved a lot of pipelines going through Texas and other places, including, as you know, the Keystone XL pipeline I approved. The Dakota Access Pipeline,” Trump said during a May 2019 visit to a Louisiana liquefied natural gas facility. “We did them, I think, in my first week. And it’s great. It’s great.”

Some of the blame sits with the Trump administration itself, said Jason Bordoff, a former Obama administration energy adviser who is currently advising Joe Biden’s campaign and is the founding director of the Center on Global Energy Policy at Columbia University.

While environmental groups and Native American tribes that fought the projects have gotten more sophisticated in their courtroom tactics, it was Trump’s attempts to fast-track the Keystone XL and DAPL projects that ironically led to fatal environmental permitting flaws that prompted the courts to block them, Bordoff said.

“Reports of the death of oil and gas pipelines seem exaggerated,” he said. “More importantly, a key reason for these recent pipeline defeats is that Trump’s energy dominance agenda backfired, as his administration was taken to task for cutting corners in their environmental reviews. With a more careful and thorough environmental review process, other pipeline projects may yet be able to move forward.”

A White House official referred questions to the Justice Department, which declined to comment.

Environmental groups have been happy to take credit for blocking the three pipelines, which they have fought through courtroom battles and in publicity campaigns for years. The campaign against the Atlantic Coast Pipeline in particular managed to draw out the approval process, even succeeded in taking it to the Supreme Court, which sided with developers Duke Energy and Dominion Energy last month.

But the greens’ strategy of causing delays ultimately drove up the pipeline’s cost by $3.5 billion — nearly double its original $4 billion construction estimate — and the two utility owners canceled it rather than risk further overruns. Some environmentalists said they believe those tactics have helped turn the tide for good against oil and gas pipeline projects.

“If I was a pipeline builder right now, I would be very, very nervous,” said Kelly Sheehan Martin, director of the Beyond Dirty Fuels Initiative at the Sierra Club.

The Trump administration has also pinned the blame on environmental groups. After a federal judge on Monday ordered the shutdown of the Dakota Access Pipeline, which Native American tribes and environmentalists have fought for years, Energy Secretary Dan Brouillette issued a statement blasting environmental groups — despite D.C. District Court Judge James Boasberg’s laying the blame squarely on the Army Corps for failing to complete a required environmental review.

“It is disappointing that, once again, an energy infrastructure project that provides thousands of jobs and millions of dollars in economic revenue has been shut down by the well-funded environmental lobby, using our Nation’s court system to further their agenda,” Brouillette said.

Even some environmental groups say the administration and energy industry can exaggerate the greens’ influence. Most pipeline projects draw little or no litigation at all, and green groups may not even have won the recent cases if the administration had done a better job of permitting, according to Lorne Stockman, senior research analyst at Oil Change International, a group that advocates for renewable energy.

If anything, the oil industry may now have to take a breather from building new pipelines after the construction “frenzy” in the years that followed the oil and gas boom that has made the U.S. the leading global energy producer, he said.

Tens of thousands of miles of pipelines have been built in the last decade, and many more are in the process of being added. Most of the new pipelines built recently connect the Permian Basin in west Texas and New Mexico to export terminals on the Gulf Coast, industry analysts said. There are also new pipelines built to bring fuel out of the Bakken field in North Dakota and fields in Colorado down to the Gulf, Stoody said.

“It can be exaggerated somewhat how much power we really have,” Stockman said. “The industry seems to be crying over spilled milk when they’ve gotten 99 percent of what they want” in pipeline permits.

Green groups have gotten an assist from some states that have made it particularly hard for pipelines to cross their borders. Pipeline companies have found it nearly impossible to build new lines in the Northeast. New York Gov. Andrew Cuomo has used his authority under federal water laws to block projects that would bring gas into New England, a tactic the American Petroleum Institute worries could threaten 70 other pipeline projects.

People in the energy industry say a dearth of of major pipelines in development at the moment has at least as much to do with the industry’s struggles to cope with the financial, political and market uncertainty as any fears of environmental litigation.

Oil demand has suffered as the global Covid-19 pandemic has kept drivers off the road and grounded airplanes, and the 2 million barrel per day drop in U.S. oil production has sapped interest in new pipelines from investors who were already skittish on an industry that was struggling to remain profitable before the pandemic.

Experts have jettisoned their bullish forecasts that U.S. oil production would reach a record 13.7 million barrels per day by 2021, and industry insiders including ConocoPhillips Chief Executive Ryan Lance have said they doubt oil and gas production will reach pre-pandemic highs above 13 million bpd anytime soon.

Even if oil production recovers to where it had been, the existing pipeline capacity can handle the flow, said Tom Kloza, head of energy analysis for the oil price tracking service OPIS.

“One could argue that even if gasoline and diesel return to 95 percent of the 2019 demand numbers, we’ve got plenty of pipelines to move products in North America,” Kloza said.

Besides economic questions, political uncertainty as to whether the Oval Office next year will be occupied by Trump or Biden — who has vowed to withdraw Keystone XL’s cross-border permit and reduce oil and gas production on federal land — is also weighing on companies‘ decisions whether to pitch new pipelines now, said Dan Eberhart, chief of executive of oil services company Canary LLC and a Republican donor.

Lower shale output has made pipelines “less urgent” than during the boom years, but projects could still go forward if Trump wins reelection, Eberhart added.

“Companies are being cautious, waiting to see how the election wrings out and what the regulatory landscape is going to look like in 2021,” he told POLITICO. “If President Trump wins reelection, I expect you’ll see a lot of these projects — or similar ones — come back up.”