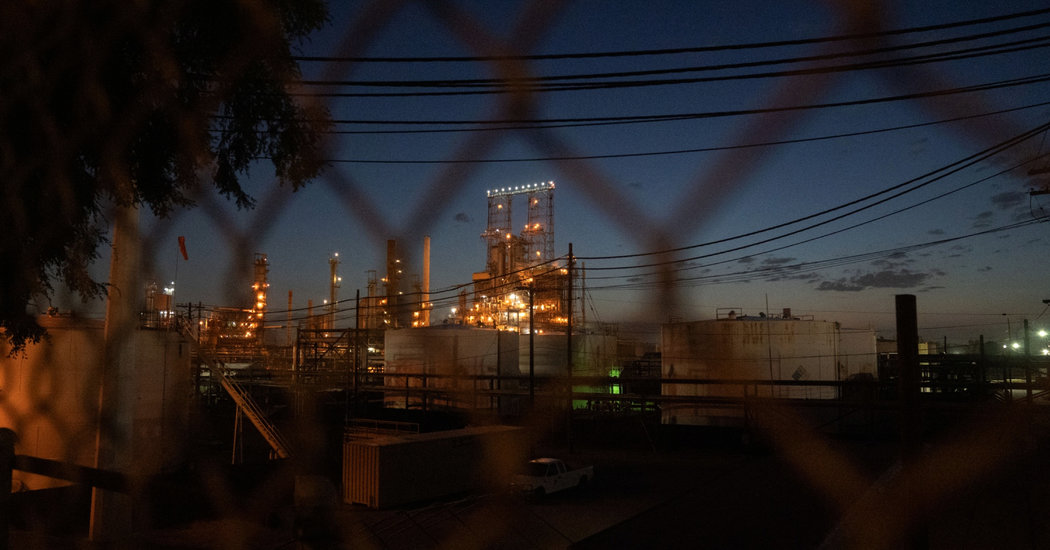 HOUSTON — Workers at Marathon Petroleum’s refinery in Gallup, N.M., are turning off the valves. Oil companies in West Texas are paying early termination fees to contract employees rather than drill new wells. And in Montana, producers are shutting down wells and slashing salaries and benefits.

Just a few months ago, the American oil industry was triumphant in its quest for energy independence, having turned the United States into the world’s biggest petroleum producer for the first time in decades. But that exhilaration has given way to despair as the coronavirus has kneecapped the economy, destroying demand for gasoline, diesel and jet fuel as cars sit parked in driveways and planes are consigned to remote fields and runways.

The oil industry has lived through many booms and busts, but never before have prices collapsed as they have this week. On Monday, one closely watched price fell below zero, meaning some traders had to pay others to take crude oil off their hands. That price — for May delivery — recovered on Tuesday, but not nearly to levels where oil companies can make a profit. At the same time, the price of oil for June delivery fell by about half to roughly $10 a barrel.

“I’m just living a nightmare,” said Ben Sheppard, president of the Permian Basin Petroleum Association, which represents companies in the area of Texas and New Mexico that became the world’s most productive oil field last year.

In Midland, Texas, the epicenter of the oil shale boom over the last decade, parking lots at companies like Chevron, Diamondback and Apache are empty aside from a scattering of pumping trucks. Executives are working from home, huddling with their colleagues and board members to decide how quickly to shut down production and lay off workers. Oil giants like Exxon Mobil have slashed their 2020 exploration and production budgets by nearly a third, and that was before the total oil price collapse at the start of this week.

Many smaller oil companies are expected to seek bankruptcy protection in the coming months after having spent years borrowing billions of dollars to extract and move crude. Production companies have $86 billion in debt coming due between 2020 and 2024, and pipeline companies have an additional $123 billion they have to repay or refinance over the same period, according to Moody’s Investors Service.

“We are worried that the current disorderly market has adversely damaged the industry,” said Ben Luckock, co-head of oil trading at Trafigura, a large exporter of American crude. “In the short term some form of government assistance is likely needed because the price levels we are currently transacting at are unsustainable for U.S. producers.”

The reverberations to other industries could be significant. A decade or two ago, low oil prices would serve to bolster the American economy by reducing energy costs. But the oil industry has become so big and important — it directly and indirectly employs 10 million people — that its problems will deal a blow to many kinds of businesses, including manufacturers that build its equipment, steel companies that make its pipes and banks and hedge funds that lend it money.

President Trump has said that he stands ready to help U.S. oil and gas businesses, a position he reiterated on Tuesday. But the policies he and other administration officials have proposed — imposing tariffs on foreign oil or filling the Strategic Petroleum Reserve — would do so little that their impact would amount to a rounding error.

Simply put, the global oil industry is producing vastly more oil than the world needs — about 30 million barrels a day too much. Even if the federal government started buying oil for the reserve immediately, it could absorb only half a million barrels a day, or less than 2 percent of the excess world production.

Some industry executives had pinned their hopes on the Texas Railroad Commission, asking it to exercise a power it has not used since 1973 to force oil companies in the state to cut production. But the commission, which regulates the industry there, declined to do so at a meeting held by videoconference on Tuesday, with two of its three commissioners saying that they needed more legal advice before making a decision.

All the while, the glut of oil keeps growing. And refineries, storage tank hubs and pipelines are quickly filling to the brim, while ocean tankers carrying as much as 300 million barrels of oil are floating or sailing figure-eights waiting for buyers.

The tanker operators, who can make more than $100,000 a day for spot charters of their ships, may be the only ones making money right now.

Mr. Trump’s biggest service to the industry was to help push Saudi Arabia, Russia and other producers to reach a deal on April 12 to cut 9.7 million barrels of daily oil output. But oil prices fell sharply after that agreement as traders realized its inadequacy. It also doesn’t help that the pact won’t even go into effect until May 1.

With 73 employees, Texland Petroleum, a producer in the Permian Basin that has 1,211 wells, is typical of hundreds of independent companies that represent the backbone of the industry, especially in rural areas of Texas, Oklahoma, Louisiana and North Dakota. In business since 1973, it has survived several downturns but always managed to sell its oil at prices that allowed it to at least break even.

That is not true anymore. At least four customers have canceled purchases in recent days. One customer canceled contracts effective May 1 for 2,000 barrels a day, nearly 30 percent of the company’s output.

“It’s a sad time for our business, that’s for damn sure,” said Jim Wilkes, president of Texland. “The future is very cloudy right now because the pricing is below our production costs.”

Mr. Wilkes has decided to shut all production and end all sales on May 1. Shutting wells is an expensive, laborious process, he explained, with workers obliged to treat well casings with chemicals so they do not corrode once oil stops flowing. And there is no guarantee that a shuttered well can be restarted and be made to pump out as much oil as it did earlier.

Mr. Wilkes said he was not planning to fire anyone, at least not now, because he took a Small Business Administration loan to pay his workers for two months, at which point the loan will be forgiven. But he is not sure what he will do after that.

Montalban Oil & Gas Operations, a company with 200 wells in Montana, is planning to shut all of its wells in 10 days when its executives expect to run out of storage space. It has slashed its payroll by 25 percent, and its president, Patrick Montalban, and other senior executives have taken a 50 percent pay cut.

Aside from worrying about the future, Mr. Montalban said he had been stocking up on $6 bottles of chardonnay, his drink of choice.

“It’s a bloodbath out there; can you imagine minus $37 a barrel?” he said, referring to the price oil fell to on Monday. “There is something wrong with that market. It’s ridiculous.”

Oil companies generally employ service companies to do their drilling and fracking, and so the downturn is particularly painful for those businesses — Halliburton, Baker Hughes and Schlumberger. Service companies have slashed payrolls and budgets in recent weeks, as have the thousands of smaller contractors that take care of things like cleaning spills, seismic testing and supplying trucks.

Offshore drillers, which had done a brisk business over the last three years, have gone into a tailspin, with delays in investment decisions and canceled rig contracts. Diamond Offshore missed an interest payment on its debts last week and has hired legal and financial advisers for a potential restructuring.

Latshaw Drilling, a company active in Texas and Oklahoma, has laid off 300 of its 500 employees over the last six weeks. It is operating six of its 41 rigs and dropping an additional rig next week. Trent Latshaw, the company president, said he was confident the industry would eventually come back after the virus is tamed.

“If for some reason Latshaw Drilling doesn’t make it through this,” Mr. Latshaw said, “the good Lord has something else planned for me.”